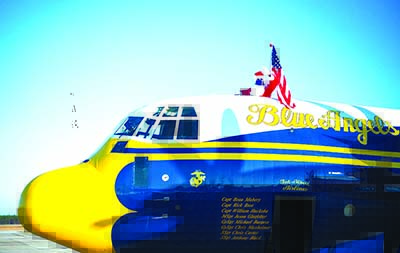 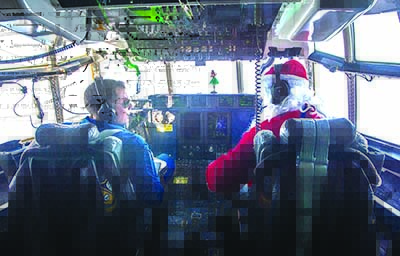 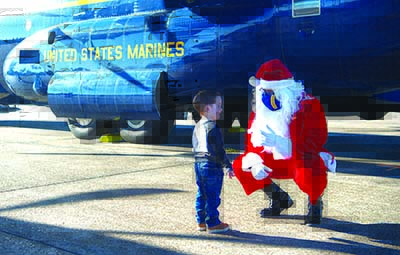 Santa catches a lift on Fat Albert to transport toys to Lake Charles kids
The Pensacol NAS based Navy Flight Demonstration Squadron, the Blue Angels, supported the Marine Toys for Tots program by delivering toys and games to families impacted by the COVID-19 pandemic and recovering from multiple hurricanes in Lake Charles.
The team conducted the event in collaboration with Hasbro, Good360, and, of course, Santa Claus.
Santa, through his U.S. Marine Corps connections, originally reached out to the Blue Angels, to seek alternative transportation early this year. The Blue Angels offered their Marine C-130 aircraft and crew in support to fly these much-needed toys this holiday season.
The Blue Angels’ C-130J logistics and support aircraft, affectionately known as “Fat Albert,” flew toys into Lake Charles Regional Airport where Marines from Marine Forces Reserve units along with a host of volunteers unloaded the toys and delivered them to the local Toys for Tots coordinators in the surrounding parishes for families in need for the 2020 holiday season, after two hurricanes made direct landfall in Southwest Louisiana in less than six weeks.
Hurricane Laura roared ashore with its staggering, 150 mph (241 kph) winds, and Hurricane Delta followed, with less wind but with ferocious downpours. The two back-to-back hurricanes left the area blanketed with tarpaulins, debris and flooded streets.
“When we received the call from Santa asking for a helping hand with an early toy delivery, we knew we were the right team for the job,” said Capt. Rick Rose, Fat Albert’s lead U.S. Marine Corps pilot. “Spreading the holiday spirit of giving and joy is what it’s all about.”
Throughout 2020, Hasbro has partnered with Toys for Tots to distribute toys and games to children who were most impacted by the pandemic.
“This year Lake Charles has not only been dealing with the devastating effects of the pandemic, but also with multiple destructive weather events that have left thousands of residents without homes and basic necessities,” said Matt Connelly, CEO of Good360. “Our partnership with Toys for Tots allows us to bring joy to children and families undergoing the most challenging of circumstances, and it is our honor to take part in this distribution event with the Blue Angels.”
In June 1955, the Blue Angels relocated from NAS Corpus Christi to their present home base at NAS Pensacola.