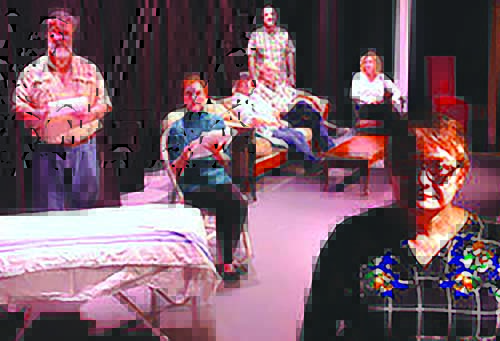 By Fran Thompson
Of course, local playwright Laura Pfizenmayer was self reflecting when she wrote “Cancer Can Kiss My A$$.’’ The story of one woman’s battle and triumph over anal cancer is based on her own story.
After debuting at South Baldwin Theatre in Gulf Shores last April, the play was a featured zoom production at the International Center For Women’s Playwrights and was also produced by The Merely Players Troupe in Atlanta.
“This is a play that has some legs. I hope to see it produced all over the country,’’ Pfizenmayer said.
A special local revival of the play on March 5 will also serve as a fundraiser for the Anchor Cross Cancer Foundation, a community based not for profit foundation dedicated to cancer patient assistance, community education and providing hope to patients when all hope seems lost.
The evening will begin at 7 p.m. with heavy hors d’oeuvres provided by the Coastal Community College Culinary School. There will be cancer screening information available in the lobby, and Pfizenmayer’s doctor at The Southern Cancer Center, W. Curry McEvoy, will introduce the production. The play will begin at 8 p.m., and desserts and coffee will be served at intermission. Tickets are $40 per person, and all funds donated at the event, which includes a silent auction will go directly to Anchor Cross. (Info: sbct.biz) The play is also set for March 6 at 2 p.m. at SBCT.
“I am hoping we can help a lot of Baldwin County cancer patients, which is what Anchor Cross does,’’ Pfizenmayer said. “They help patients pay the power bills or help with medicine or with rent. The are there to help, and it is a wonderful thing that all the money we raise will help them with that.
“If one person attending is induced to get a cancer screening than it will have been totally worthwhile,’’ she added. “All the actors wanted to revive it because they wanted to see the play be put to good use.’’
Pfizenmayer said that in most productions dealing with cancer, the patient dies, even though most cancer patients survive.
“But this is a very uplifting look at cancer,’’ she said. “Instead of people dying, they get to live. I was able to go through that experience and it does change you. One of the lines in the play is that it changes you on a cellular level. And it’s true. This play is about not only living with it, but thriving with it and having a good life. As a playwright, my plan was to take what happened to me and put it to good use. To make it matter. That is why we all wanted to revise this.’’
Directed by Jan Hinnen, the cast includes (pictured with Pfizenmayer) Ann Gaynor, Mel Middlebrooks, Barbara Campbell, Steve Henry, Rio Cordy and Robert Gardner.