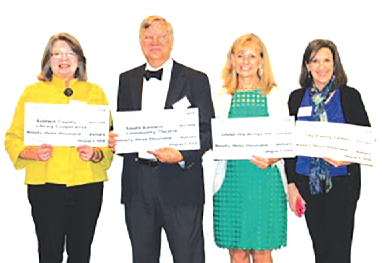 The South Baldwin Community Theatre fundraising committee will host a White Linen Fundraiser on Saturday, November 12 at 6:30 p.m. at the theatre. Come join fellow theatre supporters for an evening of entertainment, hors d’oeurves, beer and wine tastings, fellowship and a silent auction. All activities will be in the parking lot and the lobby of the Theatre. Tickets are $50 per person or $75 per couple. Funds raised will help the theatre board get close to its goal of raising the $115,000 it will cost to replace the lights at the theatre. To purchase White Linen tickets or make a donation, go to sbct.biz and follow the links. South Baldwin Community Theatre is located at 2022 W 2nd St. in Gulf Shores 251-968-6721.
The theatre had already raised about $5,000 for the project, and Impact 100 of Baldwin County (impact100baldwincounty.org) recently awarded SBCT $93,000 toward the campaign, bringing the total raised to $98,000 for the “Let’s Get Lit” campaign to replace the lights.