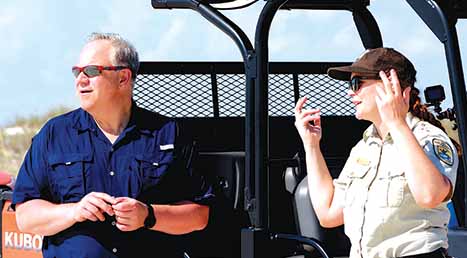 Secretary Of The Interior Visits Bon Secour Wildlife Refuge & Mariculture Center
On Tuesday, June 16th, Secretary of the Interior David L. Bernhardt toured the Claude Peteet Mariculture Center in Gulf Shores, Alabama and conducted a site inspection at the Bon Secour National Wildlife Refuge. At the Claude Peteet Mariculture Center, the Secretary met with Chris Blankenship, the Commissioner of the Alabama Department of Natural Resources and Conservation, Robert Craft, the Mayor of Gulf Shores, and other Alabama DCNR staff where he received a briefing on their fish hatchery and the construction of artificial reef systems. During the tour, the Secretary viewed the broodstock holding room, zooplankton room, recirculating aquaculture system, and ponds. Secretary Bernhardt then traveled to the Bon Secour National Wildlife Refuge to conduct a site inspection and thank the refuge staff for their hard work to keep the refuge accessible to the public throughout the pandemic. The Secretary was joined by Congressman Bradley Byrne for a tour of the refuge by boat, and they took part in a coastal restoration project planting black needlerush. The Department of the Interior has worked with the State, the National Fish and Wildlife Foundation and the Conservation Fund to protect pristine scenic property adjacent to the refuge and rehabilitated an aging trail within the refuge to help boost ecotourism and make it more accessible for those with mobility differences. Interior has also constructed two dune walkovers to provide the public with access to the beach, while protecting the Alabama beach mouse from foot traffic. All of Bon Secour NWR‘s trails and outdoor spaces remain open and accessible for the American people to enjoy.