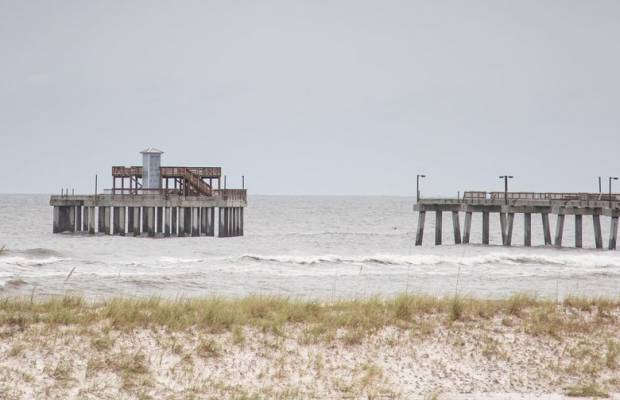 Section of Gulf State Park Pier succumbs to Sally’s surge
State hopes it can open remaining section to anglers soon
By David Rainer
Al. Dept. of Con. & Nat. Resources
One aspect of living on Alabama’s beautiful Gulf Coast is the realization that the best-laid plan is no match for Mother Nature.
The original plan was to gather on September 16 at the Gulf State Park Pier to celebrate the grand reopening of the 1,542-foot pier after a $2.4 million renovation.
But Hurricane Sally made landfall in Gulf Shores in the early hours of September 16 as a strong Category 2 hurricane with winds clocked at 105 mph. A wind-speed detector on a nearby tower clocked a 121-mph gust.
I soon got word through the little cell service available that the northern Gulf Coast’s premier fishing and educational pier, which opened in 2009 after Ivan razed the previous pier, had succumbed to the constant battering of Sally’s surge.
The section of pier closest to the end octagon was gone. The majority of the blowout deck panels were scattered all along the sugar-sand shoreline.
The good news is the new Lodge at Gulf State Park and nearby structures were relatively unscathed because those buildings were designed to withstand winds of up to 150 mph.
“The damage to the pier is the most obvious that everybody has seen on TV and had the most questions about. We were very surprised by the amount of damage to the pier,’’ said Chris Blankenship, Commissioner of the Alabama Department of Conservation and Natural Resources. “But I was pleasantly surprised by how the dune system held up on the beach. And the Lodge at Gulf State Park, which was built to fortified building standards, fared very well during the storm.”
Commissioner Blankenship said divers are scheduled to assess the damage to the pier and determine the structural integrity of the remaining pilings.
“After that is finished, we will be able to make plans to get the pier reopened at least to the part where it broke off while we repair the entire structure back out to the octagon,” he said.
Greg Lein, Alabama State Parks Director, said the good news about the pier is that the staff has been able to recover more than 200 of the deck panels that are designed to blow out to protect the infrastructure.
“They found some about 4 miles down the beach,” Lein said. “A couple were found in swimming pools down there. It’s amazing our crew has been able to recover so many panels. The pier will be inspected. If it’s structurally okay, we’ll be able to put a lot of those panels back, and we may be able to reopen a portion of the pier,’’ he said.
Lein said strike teams were formed several years ago in each district of the State Parks system to assist in natural disasters. The teams are comprised of employees capable of running chainsaws, skid steers, backhoes and tractors.
Pictured: A section of the newly renovated Gulf State Park Pier is gone after a battering by Hurricane Sally.