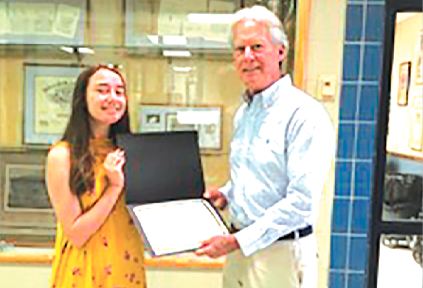 The Frank Brown Foundation for Music recently presented scholarships to college bound seniors Daphne Griffin of Foley High School, Escambia High’s Kaitlyn Speegle and Pine Forest High’s Gavin McCollum. The scholarship fund was greatly enhanced by proceeds from the November 2018 Perdido Key Chamber of Commerce Golf Tournament.
Over the past several years more than $20,000 has been awarded to support the education of young people on the Alabama/Florida Gulf Coast.
A number of compelling essays were received, and the committee found it extremely difficult to choose the recipients.
In addition to the scholarships, the FBISF Foundation sponsors an In Schools Outreach Program, bringing professional songwriters to students of varying ages.
The progam combines performance and dialog. Presentations include general instruction on the subject, and the instructor addresses the various aspects of songwriting as a career.
“Our goal is for the student’s excitement in songwriting and writing in general to carry on beyond the presentation,” said program director Karen E. Reynolds. “Statistics show that programs such as this can benefit the students in a variety of ways, including social skills, self-confidence and self-esteem.’’
The program is offered at no cost to the schools. Presentations have historically been conducted during the ten days of the annual Frank Brown Songwriters Festival. However, support by the Frank Brown Foundation for Music and others has enabled the program to be extended to a year-round basis.
The City of Gulf Shores and Lulu’s sponsored and hosted a youth songwriters showcase at the City of Gulf Shores Cultural Center in 2018. Several hundred students from area schools were treated to the sounds of original songs written and performed by a dozen of their peers. The songs were evaluated and critiqued by a panel of professional songwriters with the winner earning a spot in the 2019 festival.
Pictured: Scholarship recipient Daphne Griffin and FBISF Director Andy Haynes.