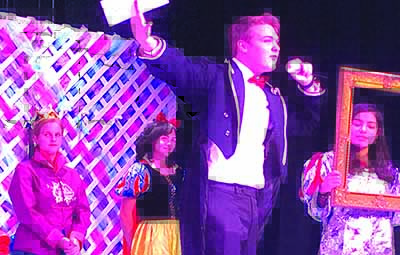 The South Baldwin Community Theatre production of “The Snow White Variety Show” by Brian D. Taylor will open at 7:30 p.m. on April 13 at the Gulf Shores theatre. Part of the theatre’s Young Artist Series, the curtain will also open at 7:30 p.m. on on April 14, April 20 and April 21, with 2 p.m. matinees scheduled on April 15 and April 22. Tickets are $9.95 for students and $15 for adults and available at sbct.biz or at the South Baldwin Community Theatre box office, located at 2022 West 2nd St. in Gulf Shores (251-968-6721. Be a memebr of the live studio audience for the most watched, most talked about show on the Fairytale Network, Real Talk with Fairytale Legends, where the seven dwarves will tell the story of Snow White as the Fairytale Players bring it to life. As each new dwarf takes a turn telling part of Snow White’s famous story in his or her own unique voice, the players’ re-enactment shifts to match the style and personality of that particular dwarf. At any given moment, the story can be anything — romance, comedy, home improvement show, suspense, Western, epic poetry, mystery, cooking show, stand-up routine, or blockbuster action movie! There’s even a “Miss Fairest of Them All” beauty pageant! It all culminates in a mad-dash ending of fast-changing genres that sets the record straight on Snow White’s happily-ever-after. Pictured: Young actors practicing for the upcoming SBCT production of “The Snow White Variety Show.”