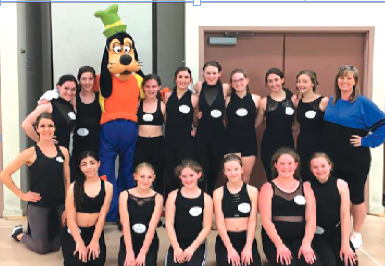 South Baldwin Dance Co. Back From Disney Trip
South Baldwin Dance Center Company team returned from a trip to Disney with experiences of a lifetime. Seventeen members of the dance team traveled to Orlando, where they will participated in the Disney Performing Arts Performance program. This program included a workshop led by a teaching artist performing in Finding Nemo: The Musical at Animal Kingdom. The workshop included rigorous training in different types of dances and a mock audition. The dancers learned two new dances (Hocus Pocus and Be Prepared) that will be performed by Disney performers in the fall of 2019. After the mock auditions, the dancers were also taught do’s and don’ts of resume building and perfecting headshots. During the girls last run through, Goofy showed up for a visit. The dancers performed a 25- minute showcase of their own competitive dances in front of an audience at Disney Springs. Heather Ford, owner/teacher, says she hopes to make this a yearly trip for the team. Learn more about auditions for the Company team by calling South Baldwin Dance Center. Auditions will be held May 3. Pictured: Bottom row from: Jaslyn Thomas, Alex Davis, Molly Henry, Bella Sallin, Addison Ford and Alexa Chapman; Top row from left: Audrey Harden (Disney teaching artist), Quinne Reagan, Anna Kathryn Bradford, Goofy, Carleigh Jurkiewicz, Sydney Ford, Baylor Olive, Lauren Henry, Anastasia Ford, Courtney Florczyk and Heather Ford. Not pictured: Saige Englebert, Emily Perkinson and Finley Loper.