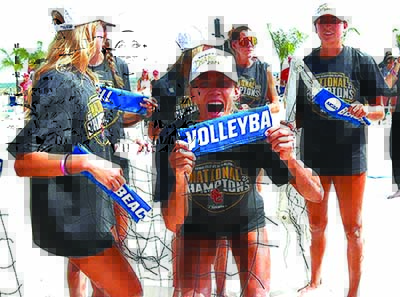 Southern Cal won the 2021 beach volleyball championship, for the third time in the five year history of the sport, stunning two time champ and top seed UCLA 3-1 in the final played at Gulf Shores Public Beach on May 9. USC did not give up more than one dual point in any match on their way to the title.
Although the NCAA will allowed only 700 spectators per day for the three-day championship, all matches were either televised live or streamed by ESPN networks. Gulf Shores will also host the tourney in 2023 and 2024, before the event moves to Huntingdon Beach for 2025 and 2026. Gulf Shores will try to negotiate a contract to permanently host the event beginning in 2027, giving it a signature spring family weekend, as opposed to the raucous Hangout fest. A national qualifying junior beach volleyball tourney drew 480 teams to Gulf Shores Public Beach the same weekend.
Gulf Shores Public  Beach has been the tourney site for nine years, including four AVCA Championships before the sport earned its NCAA sanction.