Staff scrambling to get ready for first day 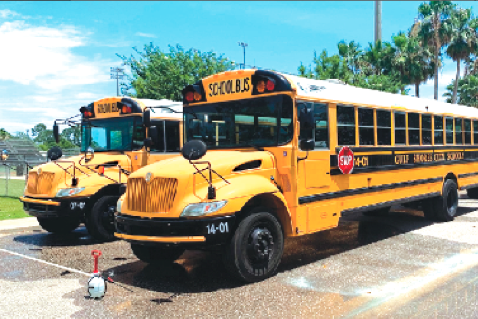 Staff scrambling to get ready for first day
At the July 22 City Council meeting, City of Gulf Shores Assistant Public Works Director Noel Hand presented an update on progress of work at the three school campuses as the first day of class looms for the city’s new school system.
At the schools, less than two weeks remain before students report to class. This summer about 60 kids attended a Spanish immersion class for a week at the elementary school and about 60 more for an ecotourism class that was also a week at the middle school.
On the grounds, Hand has been overseeing new loops for splitting up traffic flow between the elementary and middle school and a bus loop that enters on Dolphin and unloads near the middle school soccer field. The new loops are on schedule to be paved and completed before classes start.
“Aug. 9 is the first day of school and it’s haunting me,” Hand said with a laugh. “But on Aug. 10 I’m going on vacation.”
Lush landscaping is planned for the campuses and Hand said water from a new well will help defray the costs of watering it to keep it verdant and surviving.
“When you start the irrigation system and you’re running the irrigation system then you get $10,000 worth of bills in that month,” Hand said. “We didn’t want to have that cost so we wanted to go with a well.”
Most water on the island, Hand said, has lots of iron in it and can stain concrete and buildings when used in the irrigation system. The city found an expert to come out and help with that problem.
“The water is able to irrigate all of the massive irrigation system that we are installing,” Hand said. “We won’t have a huge monthly bill. That was one of the biggest concerns that we had. We love all our landscaping but we knew it was going to be costly to maintain. The well was going to be our magic bullet to not have to pay that water bill.”
It’s 280 feet into the ground and the iron levels were low in the source that was found, Hand said.
Griffin said the water will also eventually be used in the chillers for the air conditioning units in