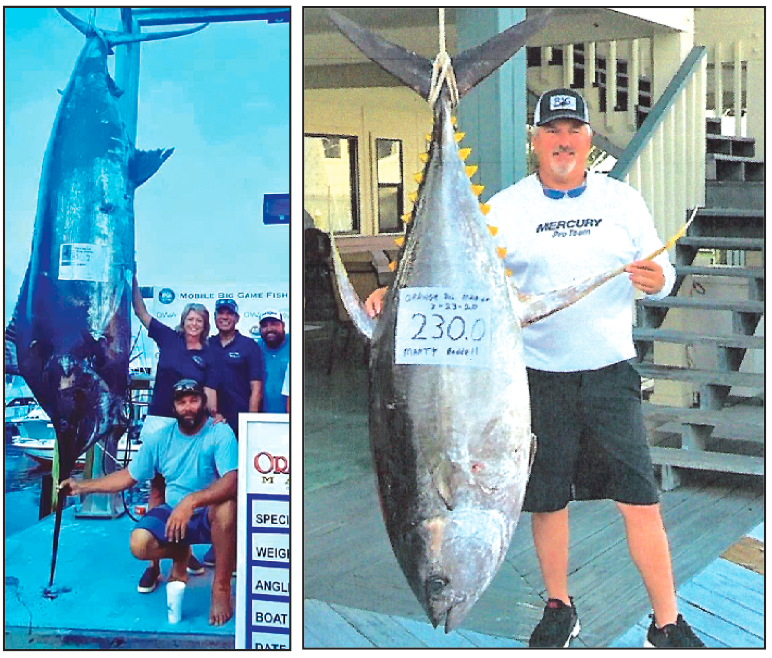 State records set for Bonito, Yellow Fin & Blue Marlin at Alabama Deep Sea Fishing Rodeo
By David Rainer
Al. Dept. of Conservation & Nat. Resources
Kyle Davis swung the big fish into his 21-foot boat during the Alabama Deep Sea Fishing Rodeo this summer and let it flop on the deck for a minute, never considering what he had just landed.
The Irvington resident just thought the fish, a little tunny more commonly known as a bonito, would make some nice bait when he goes shark fishing.
“I was fishing for blackfin tuna in 1,200 feet of water,” Davis said. “It was not the location I normally go fishing. I’m only on a 21-foot boat. I pushed 74 miles out. I go out a little farther, and we got into a good school of bonito.
“We were catching them in varying sizes, some like that one. We were cutting them in half to freeze them for bait. We decided to keep that one to turn in at the rodeo. We had no idea we had a state record on board.”
What Davis accomplished by hauling in that little tunny was snapping the longest-held record in the Alabama Marine Resources Division’s (MRD) saltwater record book. Davis’ bonito weighed 22 pounds, 4 ounces to eclipse the 21.0-pound mark set by W.A. March Jr. of Mobile in 1956.
“If my buddy hadn’t called me the next day and told me it was a state record, it was about to be going out to be used as shark bait,” Davis said. “I called and asked the rodeo about it; they said not to do anything with it. Luckily, I still had it in the cooler. By the time they told me they needed the fish, I had it cut in half to get ready to freeze it.”
Fortunately, MRD biologists had plenty of evidence of the catch through the rodeo and confirmed the species, which is different from the smaller Atlantic bonita.
Fishing the rodeo is a big deal for Davis and his buddies. He admits he pushes the envelope a bit with a single-outboard boat during the rodeo.
“We plan for a while for the rodeo,” he said. “At the beginning of the year, I start finding spots with big fish, and then I leave them untouched until the rodeo. Honestly, I just wing it. If it’s pretty weather, I go far. If it’s not, I stay inshore.”
“I don’t normally go more than 50 to 60 miles in my boat, but I like going out to the pelagic waters and catching tuna. I like the taste of tuna. I was trying to put tuna on the board in a 21-foot boat, just to be known as being kind of crazy.”
To go that far, Davis takes a little extra fuel if he finds a bite he can’t resist.
“I’ve got an 80-gallon tank and get 2.9 miles per gallon,” he said. “I bring 30 gallons extra inside my console just in case. I tell my family that if I do go out that far, I know where Louisiana is. Louisiana is closer than Dauphin Island, so I tell them I’ll call them when I hit the Mississippi River.”
On that fateful day during the rodeo, Davis said they were “chunking” to entice a tuna bite. Chunking involves cutting dead bait into smaller pieces and letting them drift down to attract the targeted species.
With the rods with cut bait out, Davis picked up a rod with a 200-gram Shimano butterfly jig, dropped it into the deep and started rapidly jigging.
“I dropped it down, probably 500 to 600 feet, jigging it back up,” he said. “I probably got to about 100 feet when I got into the bonitos. We put three fish the same size as that one on the boat.”
Davis tried to get the fish back to the rodeo site in time to weigh in on Saturday, but he couldn’t get there in time.
“I had to hold onto the fish for another day, plus we went fishing again,” he said. “So, it was Sunday afternoon before we could weigh the fish. I had the fish out of the water for a long time and still had the record fish. It would have probably been a little heavier if I could have weighed it in earlier, but I just didn’t get the opportunity.”
Davis’ little tunny wasn’t the only fish recently approved for the record books. Tyler Van’t Hoff landed a 52-pound, 14-ounce Almaco jack. Bennie Goldman Jr. caught a 28-pound, 1-ounce horse-eye jack, and William Tyler Cruitt landed a keeltail pomfret that weighed 29.44 pounds.
Also, possibly missed during last year’s first wave of Covid-19, two records were set for big game species.
Ginger Myers, on the Fleur de Lis out of Louisiana, landed a state record blue marlin at 851.9 pounds. The marlin was weighed in at the Mobile Big Game Fishing Club at Orange Beach during the Mongo Challenge. In March 2020, Maurice Redell boated a 230-pound yellowfin tuna.
MRD Director Scott Bannon said the record fish illustrates just how good the fishing is in Alabama waters and off the Alabama coast. He also said breaking the little tunny record is special.
“That was the oldest standing record,” Bannon said. “That’s a big fish. State records are about bragging rights and showing off what we have. It’s not a highly sought after fish for eating, but it’s great for bait and exciting to catch. They’re all muscle, like a miniature tuna.
“When you see state records, it shows we have fantastic resources off of Alabama. Anglers get great opportunities to participate in these fisheries. Everybody wants to catch the big one, and occasionally you get one in the record books.”
Pictured: Ginger Myers of Louisiana landed the state record blue marlin that weighed 851.9 pounds. Marty Redell weighed in the state record yellowfin tuna at 230 pounds at Orange Beach Marina.