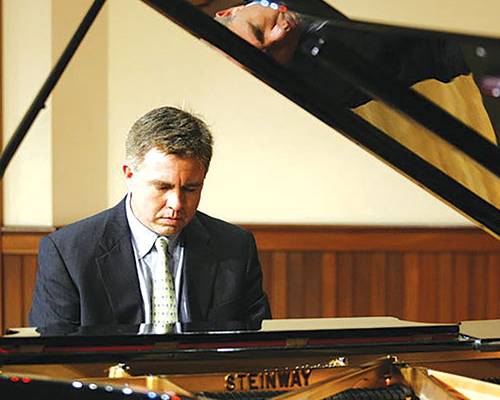 Steinway artists Robert Holm (pictured) and Victor Andzulis will play Steinway pianos during an all request summer piano concert at the Summerdale Municipal Complex (502 W. Lee St.) on Sunday, July 31 from 3-5 p.m. Admission is free, and song requests can be submitted to Norma Giles at 251-978-3245 or norma@normagilescpa.com. Pieces requested so far include Chopin’s Fantaisie-Impromptu, Sinding’s Rustle of Spring, Mozart’s Piano Concerto no. 17 in G, K. 453, 1st movement, Joplin’s Bethena, the Theme from Downton Abbey and Blessed Assurance.
Andzulis, assistant professor at the Univ. of the Cumberlands (KY) has played several times in Summerdale and will be assisting Holm in playing.
The purpose of the concert is to make the public aware that the University of South Alabama has launched an initiative to become an All Steinway School.
“We also hope to play 25 minutes of the documentary Note by Note, jkwhich shows the making of a Steinway Concert Grand,’’ Holm said.
“USA agrees with virtually all other American Universities that Steinway pianos are an essential tool to good music making. Schools across the nation are seeking the distinction of being named an all-Steinway school,’’ Holm added. “UAB, Montevallo, Troy, University of West Florida and Spring Hill College are already on this prestigious list and University of Mobile is very close. At USA, we too want to become an all-Steinway school and are hoping that request concerts will further advertise this initiative.’’
Andzulis (Above Left) also maintains a private piano and strings studio. He has previously served on the faculties of the University of West Florida and Pensacola Christian Academy. From 2013-2015, he served as Vice-President for Programs of the Pensacola Music Teachers Association. He has also worked in the Bahamas and Curacao.
He performs as a soloist and collaborative pianist throughout the Southeast. His passion for the collaborative arts and sensitivity to his fellow performers have made him a sought after accompanist.
Andzulis studied piano at South Alabama with Holm, where Holm is still a professor of music and head of the piano division. Holm teaches and collaborates with guest artists and faculty on the USA Musical Arts Series.
Added to the roster of Steinway Artists in Spring 2010, Holm is past president of the Mobile Music Teachers Association, principal pianist for the Mobile Symphony and pianist at Dauphin Way Baptist Church.
Prior to his appointment at USA in 1997, Holm received a B.A. in Piano performance at Pt. Loma Nazarene University in San Diego followed by studies at the University of Illinois School of Music, where, in 1999, he earned his doctorate. He was a semi-finalist at the 4th International Adilia Alieva Competition (2004) in Gaillard, France, a finalist at both the 2003 International Franz Liszt Competition in Grottammare, Italy and the 2002 International Bartók-Kabalevsky-Prokofiev Competition in Radford, Virginia, and Third Prize winner at the 1997 International Beethoven Piano Sonata Competition in Memphis, Tennessee.
Holm has appeared as soloist with the Mobile Symphony Orchestra on four occasions, the Mobile Youth Symphony and the USA Symphony.