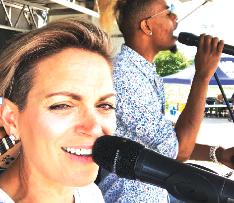 B-Street Benny will be the entertainment for July 11 and the John Martin Davis Band on July 18 during the Sounds of Summer Thursday Evening Concert Series in the central courtyard at Pelican Place at Craft Farms in Gulf Shores. August concerts scheduled by the fountain in the courtyard are David Jones on August 8 and Nobius on August 22.
Concerts are from 6-8 p.m. and free to the public. Pelican Place is located at 3800 Gulf Shores Pkwy. at the intersection of Hwy. 59 and County Rd. 4. Find more info at pelicanplacegulfshores. com
Pictured: B Street Benny has been honing its musical stylings in the French Quarter for more than half a decade, entertaining hundreds of thousands of vacationers. The band includes the husband and wife team of TJ and Brad Lewis and singer extradinaire Kentro Mason Taylor. TJ is a South Louisiana native who began singing at the ripe old age of 5. She has sang for a Christmas celebration in the White House and in Las Vegas, Los Angeles and Walt Disney World and fronts the band with husband and guitarist Brad Lewis. She hA shared the stage with Anders Osborne and the Wild Magnolia Mardi Gras Indians. She’s also opened up for Marva Wright and Irma Thomas. Her tone is rich and unique and she has a chameleon like ability which allows her to cover a vast range of styles. Brad began playing guitar at age 15 in England. He spent a number of years playing the Baton Rouge blues circuit as the guitarist for the late great Raful Neal. He also plays with the Wild Magnolia Mardi Indians on stages all over the country, including at the Rochester International Jazz Festival and the New Orleans Jazz Fest. B Street Benny would have an opening for a new bassist. He picked up the bass with his current band and now finds himself with a full work schedule on both guitar and bass. Brad’s opened up for Paul Simon, Dr. John and Bow Wow Wow.
“We knew from the first time we played music together that there was something special about it,’’ said TJ. “We’d both worked with various other musicians for years before meeting. But this was different.’’