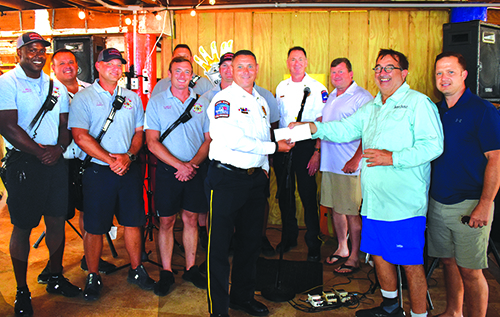 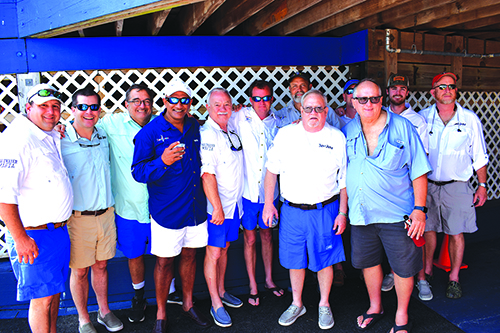 Tacky Jacks Donates Infrared Cameras to OBFD In Honor Of Buddy Skipper
In what was an appropriate way for both his Tacky Jacks and immediate family to honor Buddy Skipper, owner of Tacky Jacks, three heat seeking infrared cameras were presented to the Orange Beach Fire Dept. during a recent memorial for the Tacky Jacks owner. “Hopefully, they will save lives and property,’’ said restaurant marketing director Susan Sizemore. On March 3, 2015, Tacky Jacks Orange Beach manager Greg Walck arrived at work and noticed that the floor just inside the restaurant front door seemed warm. He called OBFD, and the fire dept. used an infrared camera to find the source of the problem. “We were very lucky it didn’t happen during the night and lucky that Greg Walck and the OBFD were on top of things,’’ Sizemore said. “Tacky Jacks started our First Responder Appreciation Week after that incident.’’ During that week, first responders are invited to bring their families to Tacky Jacks to enjoy a full meal courtesy of the restaurant.
Skipper was also honored by Orange Beach City Council after he died in a vehicle accident in Clark County on Jan. 30. “We’ve seen his love for the community, the fire and police,” Councilman Jeff Boyd said. “His outreach would go so far. You probably just can’t sit here and say it all, but he was a great anchor to this city, and he will be missed.’’
“He gave so much and did so much and the outreach for those who served, not only in our community, but also served as veterans,” Councilman Jeff Silvers said. The primary owner of iconic Tacky Jacks restaurants in Orange Beach, Gulf Shores and Fort Morgan, Skipper shied away from public acknowledgement of his benevolence. But he sepnt many years building a legacy of quietly addressing needs he saw in the communities his restaurants served.
One of the more visible contributions is to the Tacky Jacks Veterans’ Fund where each Tacky Jacks matches dollor for dolloar funds donated through collection boxes near the photo op spots at each of its restaurants. The money is used to buy all-terrain wheelchairs for wounded and disabled veterans in cooperation with the Marine League to find a deserving veteran.

Scooter Frederickson works with the Marine League and Tacky Jacks on the chair donations and recalled how Buddy would stay in the background at ceremonies and other people would be the face of Tacky Jacks when talking about the work for veterans. In addition to securing all-terrain chairs for disabled veterans, Tacky Jacks bought a custom-built chair from the Beach N Buggys for that service to give to disabled veterans to use while they are vacationing here.