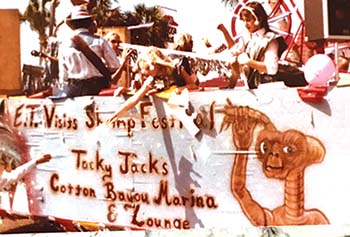 By Fran Thompson
Tacky Jacks will celebrate its 40th anniversary with giveaways, commemorative cups, live music and special pricing on signature items such as burgers and bushwhackers at all three locations on Sept. 19.
Plus, balloons will fly, streamers will hang and assorted musicians will play short sets beginning at noon from a barge moored in Cotton Bayou at the original Orange Beach location, where an 8 p.m. fireworks show will honor the military and first responders.
Jack Hodges first opened Tacky Jacks in 1980, just as Orange Beach was taking off as a vacation destination.
After purchasing, expanding and renovating the original location, George (Buddy) Skipper opened Tacky Jacks Fort Morgan on Mobile Bay in 2005 and, with a group of fellow investors, opened Tacky Jacks Gulf Shores on the Intracoastal Waterway in 2011.
As marketing director Susan Sizemore pointed out, all three restaurants have their own unique character while serving the same breakfast, lunch and dinner menus. Besides being accessible by boat, all locations feature retail gift shops with souvenirs and items from local artists.
“It’s amazing how many people find us for the first time by boat. And then they come in and are blown away by everything,’’ said Ken Kichler, who has orchestrated four kitchen renovations at Tacky Jacks Orange Beach since taking over as company CFO in 2006.
“We are on the water and people want that when they come to the beach,’’ Sizemore added. “We have a consistent menu, and people know what to expect. But each location is different and customers have their favorites.
“We are not the fanciest, but we focus on fun and that’s what people come to the beach for. We’re just kind of laid back, come-as-you-are. Well, you have to have a cover-up or shirt, but other than that, it is come as you are,’’ she added.
“They are good business people, and they are good citizens. Tacky Jacks pays it forward, making Gulf Shores a better place to live,” said Gulf Shores Mayor Robert Craft when Tacky Jacks was presented the Silver Alabama Retailer of the Year Award in 2016.
A longtime Make-A-Wish supporter, Tacky Jack’s has also set up donation boxes next to marlin statues offering photo opportunities in the parking lot at each location. The company matches all customer donations in support of veterans.
Specifically, Tacky Jacks has purchased and donated to veterans six Action Track wheelchairs that allow access across any rough terrain. The chairs, which are life-changing for the veteran recipients, start at about $11,000 per. The company has also made a tricked out chair with rubber wheels available for veterans to use while here on vacation. And it continues to raise money for the Alabama Gulf Coast Reef and Restoration Foundation through its Saltwater Mafia/Tacky Jacks t-shirts.
“It was hard to even get him (Skipper) to go to accept the Retailer of the Year award,’’ said Sizemore. She added that Skipper’s reputation as an easy touch when it comes to giving back to the military, first responders and the Pleasure Island community is well deserved.
“I remember when I first started working for Buddy, he gave $25,000 for a bus to carry low income kids around to after school activities. I said that it would be a good human interest story. But he said nobody needs to know I’m doing that,’’ she said.

Related ItemsSept 9 News
← Previous Story Boardwalk will connect West Lagoon trail to Sandpiper Lane
Next Story → Tacky Jack Hodges will be back on Sept. 19 to help celebrate what he started 40 years ago