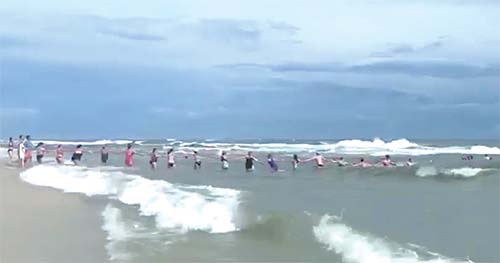 Tennessee Tourist Drowns Trying To Help Others
Karen Graham, a 53-year-old tourist from Collierville, Tennessee who was staying at The Beach Club during a girls getaway trip, drowned on Aug. 30 while leading a human chain of up to 20 people trying to save other swimmers in distress on Sept. 1. “Someone started hollering for help and Karen took off running to help,” Graham’s mother, Laura Carrigan, told NBC 15. “She swallowed water directly in to her lungs. The doctor told her husband she actually died of a heart attack from salt build up.” Fort Morgan Assistant Fire Chief Michael Ludvigsen told NBC 15 that the actions the people on the beach took were admirable, but he highly discourages people to use human chains to save swimmers in trouble. “There have been times when human chains have been successful. It’s extremely dangerous. You’re putting so many more people in danger,” he said.
“I’m hurt, of course, that she’s gone, but I know she worked really hard to save those girls’ lives,” said Graham’s mother. Graham was an organ donor. So she was saving other lives even after giving up her own through an act of bravery.