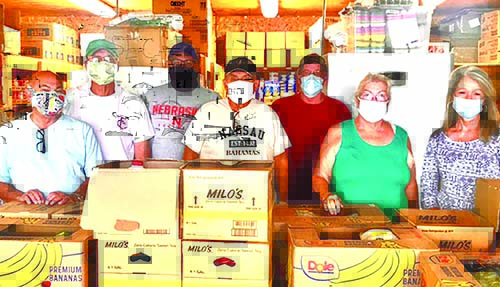 The Christian Service Center Pantry Gang
The Christian Service Center’s Food Pantry has an amazing crew of volunteers. Pantry Chairman Stan Moss would like to recognize a special group he calls The Pantry Gang. These retirees do the heavy lifting and have long given their time and energy to keeping the pantry warehouse stocked. Since the pandemic began, and now including the Hurricane devastation, the food pantry has seen a three fold increase in the number of families served. The warehouse group has been called upon anywhere from four to seven days a week to pick up groceries at various sites, deliverand unload at the Center, sort and shelve, or stock in the cooler and freezer. They often come early and stay late on weekdays, and show up to work on weekends as well. CSC is open Monday – Friday, 9-12, but work in the pantry’s warehouse can’t be confined to a set schedule, and these workers often respond on short notice. In recent weeks the crew handled over 60,000 pounds of product. Moss says this group is invaluable as the pantry could not operate without their tireless efforts.
Pictured (left to right): Don Olinski, Stan Moss, Don Harms, Don Kincaide, Rodney Monroe, Jean Austin, Angela Peters.