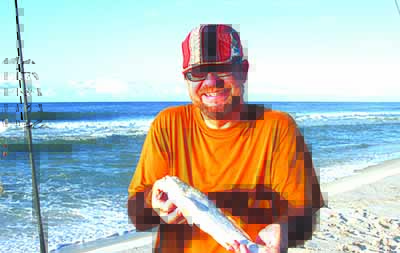 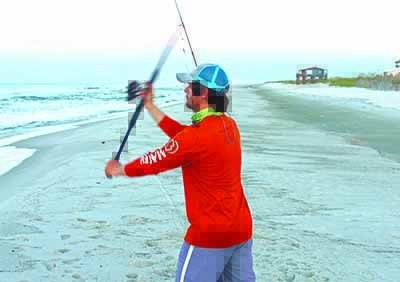 The early bird gets the whiting when it comes to surf fishing
By David Rainer
AL Dept. of Conservation and Natural Resources
The pre-dawn light was sufficient for safe passage from the parking lot over a boardwalk to a beautiful stretch of beach on the Fort Morgan peninsula.
The early arrival guaranteed our party, led by guide Matt Isbell, would get to pick the spot where our surf-fishing adventure would have the best chance of success.
Isbell, better known as the Bama Beach Bum to all his YouTube followers, has developed a niche among fishing guides on the Alabama Gulf Coast. He has tried fishing from boats and piers, but he prefers the sandy beaches and surf where whiting and pompano roam.
The Wetumpka native moved to Gulf Shores for an insurance job, but his surf-fishing success led to a full-time guide business in March of this year.
“I started uploading YouTube videos in October last year and started guiding in December,” Isbell said. “I didn’t really plan on guiding. I started hosting online content just because I loved it, and I wanted to kind of see where it went.
“I had multiple people continually asking me to take them fishing. I did that initially. Then it got to be more and more to the point it was taking away from my regular job.”
Isbell decided to see if anyone would pay for his services. He learned there is a growing market for his kind of fishing.
“It kind of snowballed from there and really started picking up,” he said.
Isbell soon found out his guide business appeals to a wide variety of customers.
“Most of my clients are out-of-towners, a lot from the Midwest but from all over the country,” he said. “I’ve had a group from Guam that wanted to fish. They saw me on YouTube. Right now, I’m the only one uploading surf-fishing content to the internet, so that’s how some people find me.
“I get people of all ages and sizes, ethnicities, all the above.”
Isbell’s surf fishing started in earnest six years ago when he moved to the Alabama Gulf Coast.
“When I first started surf fishing, I was just trying to figure out what to do,” he said. “Like a lot of people in Alabama, I grew up bass and crappie fishing. When I came down here, I just tried to figure out the fishing. I fished a lot of different ways – from boats, piers, canals, wherever I could access the water.
“Then I started surf fishing and I fell in love with it. I just enjoyed being on the beach and being able to bring home dinner.”
Isbell has refined his surf-fishing techniques in the last six years. Although he has learned to judge the surf and which areas produce fish, it’s really not a technique that infrequent visitors should tackle. He said learning to read the beach takes time, that most people find it difficult to pick up on the nuances that might lead to better fishing unless a lot of time is spent on the beach.
“The biggest thing I tell people to do is to stagger your baits,” he said. “Make sure you cover a lot of water and try to locate the zone those fish are running in. Especially when you’re surf fishing, these fish are not hanging in one area like they do on a reef or pier or jetty. The fish in the surf are always moving, looking for food. But they are going to hang in a particular depth. That’s why you stagger your baits to try to find out what depth those fish are favoring. But it can change daily or week to week. You always have to recalibrate to find the fish.
“If you know how to look for cuts, holes and bars in the surf, that can help, but most people have a hard time with it. But anybody can get out there and put baits in different spots and figure it out using that system.”
Isbell said a dedicated surf angler will need a variety of tackle to target the species that happen to inhabit the surf at any given time because different fish come to the beaches at different times.
“What we’re targeting is going to determine what tackle we use,” he said. “But the most popular way is what we are doing, using pompano rigs with bits of shrimp and Fish Bites. We’ll use sand fleas (mole crabs) when they present themselves, and we can scoop them up (look for a sand flea rake at the local tackle shop). We had some really good colonies of sand fleas show up this year. It’s a great bait and it’s free.”
On our trip, Isbell used 10-foot surf rods with 4000- and 5000-series spinning reels spooled with 20-pound-test braided line. Of the five rigs we used during our outing, we had a drop-hook rig with the 2- to 3-ounce weight tied to the bottom on three rods, while the other two were rigged with cut bait hooked below the weight (Carolina rig) to try to catch a redfish or bluefish. He uses 1/0 to 2/0 circle hooks most of the time.
“You don’t have to use 10-foot rods, but you can still fish on rough days,” he said. “You can keep a 3- or 4-ounce lead out. I make my own pompano rigs. You can buy them with two or three drops. I prefer one-drop rigs. It’s more discreet and easier to manage.”

Isbell said probably his hardest job is teaching clients what to look for to indicate a bite. A rhythmic motion of the rod tip indicates wave action. A steady pull or erratic action means some species of fish is taking the bait.
Although our party, which included Jay Hirschberg and Wayne Carman, was fishing on a neap tide, we managed to reel in bluefish, whiting (sometimes called southern or Gulf kingfish), a rodeo-worthy ladyfish and the ubiquitous hardhead catfish to the beach. Isbell said the heat has caused the pompano to vacate the surf until the weather and water cools.
Cooler weather will also bring another desirable species close to the beach.
“We get a good run of bull redfish in the fall,” Isbell said. “We will use a lot of cut bait. I’m transitioning now to using cut bait on Carolina rigs. If I’m fishing for bull reds, I’ll move up to a 4/0 hook. They will hit pompano rigs, and that’s definitely worth doing because the pompano fishing is only going to improve as the weather cools.
“You can catch whiting all year, but it does get better in the winter. That is the main species we target when it gets cold. Whiting get bigger (pushing 2 pounds) and more plentiful in the winter months. Sometimes in the winter, we’ll get a run of what we call ‘big uglies,’ the big black drum. Those are a lot of fun to catch, too.”
For those who specifically target pompano in the surf, Isbell said the best fishing occurs in the spring.
“March, April and May – those are the three months to catch pompano,” he said. “That’s go time for pompano. You can still catch them in June and July, but it’s definitely better in the spring.”
Isbell said certain conditions provide an opportunity to catch speckled trout in the surf as well.
“We catch trout mainly in the summer months,” he said. “It’s usually after a big rain and fresh water moves the fish out to the beaches, looking for that higher salinity.”
Pictured: Jay Hirschberg shows off a keeper whiting, a plentiful species that makes excellent table fare; Matt Isbell casts a piece of shrimp into the surf.