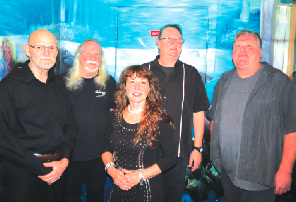 Good bands, like a cats and kids, deserve good homes. Sandra Kaye & The Legend Band is a very good band and, lucky for dancers, they will call Live Bait in Orange Beach home twice a week.
Every Friday and Saturday through through Labor Day, beginning at 8:30 p.m., the Legend Band, as they have on Pleasure Island since 1992, will serve a musical buffet with emphasis on songs that put folks on the dance floor.
Led by vocalist Sandra Kaye, the band simply does not take songs off. Everything from high energy dance to slow, moving bluesy ballads, they play with spirit and soul. Whether a cover or an original, the band brings a full and tight sound to each gig, each set and each song. The house band at Nolan’s for many years, the Legend Band has opened for Steppenwolf and The Animals. Its members have worked with John Anderson, John Conley, Billy Joe Royal, Dr. Hook, B. J. Thomas, Jeff Cook and other top acts, but when they come together, they form a dynamic powerhouse of a team that plays as one while on stage together.
Pictured: Sandra Kaye & The Legend Band includes Silva Saxon, vocals/keyboards/wind synth/flute; Sandra Kaye, vocals/lighting/pa/percussion/acoustic guitar; Charlie Stough, vocals/guitar/slide; Vic Jones, vocals/drums; Roger Agerton, bass guitar.