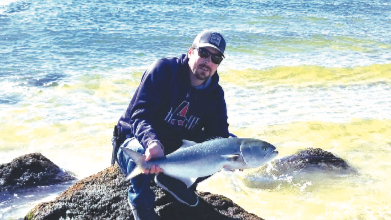 By David Thornton
This 29 inch fork length bluefish was landed and released 12/22 by Dustin Chapman in Orange Beach while on Christmas holiday from North Carolina. He caught it on a 2 ounce Halco Twisty lure. The rod was a 7 foot Penn Squadron, and the reel was a Penn Pursuit 3000 with 15 pound Beyond Braid line and a 20 pound monofilament leader. Quite a fight! In this area, bluefish commonly are only about 12 to 16 inch fork length (weighing about 1 to 2 pounds). Dustin’s 29 inch bluefish would have weighed about 12 to 13 pounds according to charts of the species length/weight ratios available online. In perspective, the current Alabama state record bluefish is listed as 17 pounds 4 ounces, and was caught in 2004. So this was quite a notable catch for our area, especially from shore. Merry Fishmas, Dustin!