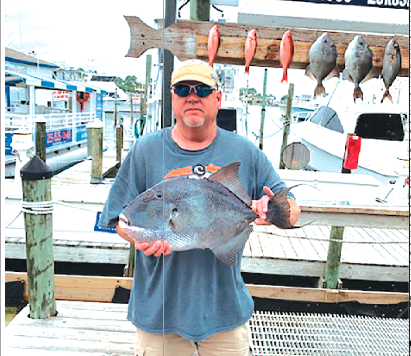 Mike Fraley of Henderson, Kentucky garnered way more than a fish dinner prepared that evening at the dockside restaurant when he registered his 9.4 lb. triggerfish caught on the Miss Brianna during last month’s Alabama Gulf Coast Slam Fishing Tournament.
Thanks to Miss Brianna owner/operator Captain Bobby Kelly, Fraley was able to enter the fish in the Zeke’s Marina based tourney open to recreational and charter boat anglers. Each angler weighing in a minimum size fish in any category could enter his name for a chance to win a 2019 Chevrolet truck.
Fraley won the truck and opted for the $20K pay-out instead.
“We’ve been coming down there for 25 years, always the first or second week of May before it gets too crowded,’’ Fraley said. “Typically we go out fishing once or twice and usually it is with Capt. Bobby. He always does real good for us.’’
Fraley was one of six anglers on the Miss Brianna.
“I saw a poster, but I didn’t really pay attention until Capt. Bobby said the trigger fish I caught was eligible for the tourney. When Bobby called I thought we maybe left something on the boat. He was more excited than we were.’’
Fraley said he may come back down to his favorite vacation spot again this October. While here Fraley and his family enjoy karaoke at The Flying Harpoon, eating at The Shrimp Basket, surf fishing and, as his good luck would have it, fishing on Zeke’s charter boats.