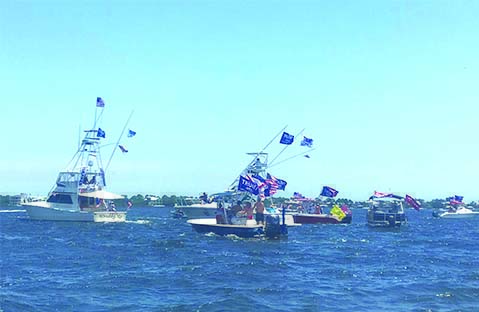 Trump Supporters Hold Birthday Boat Parades
Local supporters held a Boat Parade Birthday Celebration for President Trump at the Perdido Key Oyster Bar on June 14. Supporters drapped an American flag (above) over the Theo Baars Bridge during the event. A parade was also held in the waters surrounding Robinson Island (below) in Orange Beach honoring the president’s 74th birthday. It was part of a rally in several bodies of water across the country, including parades on the St. Johns River in Jacksonville and on a lake in Michigan. Bikers For Trump also participated in the Perdido Key event and local singer J Hawkins was the parade grand marshall. All funds raised will help veterans with voting registration.
Chris Dosev was the Panhandle event coordinator for the Perdido parade. Bill Fetke, Chapter Chairman of Trump Team 2020, spoke during to those gathered at the Perdido Oyster Bar before the parade. Trump supporters are also organizing a July 5 flotilla from Pensacola to Orange Beach. Dosev said Tom Petska is organizing that parade, but he did not provide contact info.
Trump flotillas, began May 3 in Florida, the president’s newly declared home state, according to politico.com. They’ve been called “Trump Boat Parades” or “Trumptillas,” their captains and crews nicknamed “MAGA boaters.”
In Florida, Trump has a net approval rating among boat owners of about 18 percentage points — at least six times higher than his statewide net approval number — according to the campaign’s voter profile models, which consist of 3,000 different public and consumer data points. Florida has the highest number of registered boats in the nation, nearing 1 million, according to politico.com.