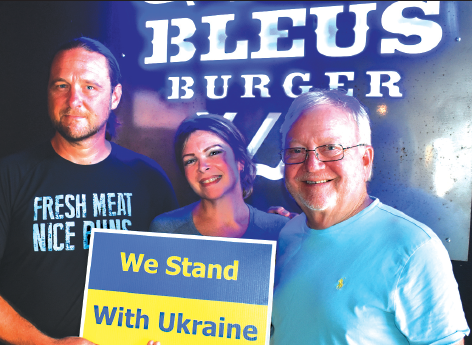 Brent Burns, the 2021 TropRock Music Association Lifetime Achievement Award recipient, is partnering with Bleus Burger owners Susan Ellis and Scott Keel (pictured with Brent) to present Ukrainian Tuesdays on June 21 & 28 to help feed Ukrainian people through World Food Kitchen. Brent will be performing from 5-8 p.m. at Bleus Burger-Gulf Shores, located across from CMX Movie Theaters in the Pelican Place Shopping Center in Gulf Shores.
For $40 per person, each Tuesday event will feature specialty Ukrainian food and wine, along with all your Bleus Burger favorites.
Enjoy authentic Ukranian dishes and know that 50 percent of all food sales on Tuesdays during June will go directly to World Central Kitchen to be used for food and supplies for the Ukrainian people who have been under duress from the Russian invasion. Additionally, total donations will be matched up to $5,000.
Ukranian menu items could include wines such as Kazayak and Cricova, and food tha could include varenyky, holubtsi, tovchanka and yabluchnyk. (That would be cabernet, pinot noir, pierogies, cabbage rolls, mashed potatos and apple cake w. streusel.)
Burns, the official Gulf Shores/Orange Beach Music Ambassador, will play favorites and songs from his latest CD, Somewhere South of Here. The album includes “Grandma Got A Glock” and “Suntans In Strange Places” in addition to the title track.
Reservations are recommended and should be made with Bleus Burger at info@bleusburger.com.