Why Not A Gulf Shores Waterway Village Gallery Row? 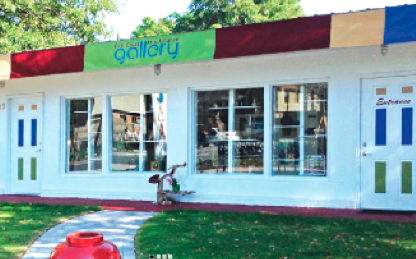 Why Not A Gulf Shores Waterway Village Gallery Row?
By Fran Thompson
“Why not a Gallery Row in the Waterway Village?’’ asks JD Swiger, a local artist who is featured along with his brother Michael, Kelly West and Nick Cantrell on beer cans being produced at Big Beach Brewing Company, a Gulf Shores Waterway Village business that did not exist when those four artists were growing up on Pleasure Island.
“It is set up for something like that now,’’ JD added about the West Canal Rd. parcel between Big Beach Brewery and the Hwy. 59 Bridge. “It would add so much more to that area. It would be amazing and it would bring in more tourism dollars. I think it’s been a missing puzzle piece in the city itself.’’
The current Gulf Coast Art Alliance didn’t even exist when the Swiger brothers were stand-out football players at Gulf Shores High less than 10 years ago.
Cantrell was walking from his Bay Circle home to watch Mr. Campbell fly his ultra-lite from the beach behind the old Orange Beach Hotel 30 years before the City of Orange Beach built its spectacular Coastal Art Center complex on that same site.
Kelly West spent 10 years in Montana honing her creative side after growing up here as an artistically inclined competitive athlete in Gulf Shores. Also a musician, West is back in time to possibly play gigs at the Performing Arts Center in Orange Beach set to open next summer.
The aforementioned homegrown artists are all committed to seeing their town recognized as a place to find great original art in addition to beautiful beaches and fresh seafood.
The City of Orange Beach, with its beautiful Coastal Art Center, Hot Shop, Clay Studio and popular spring art fest, has always had an eye towards promoting the creative side of beach life.
The growth of art culture in Gulf Shores is slowly catching up, and it can be traced directly to the Gulf Coast Art Alliance and its gallery located smack in the middle of Waterway Village.
The non-profit was started by Tommy Vogel, Eloise Thomley, Maria Bastin and others just six years ago and it has been growing ever since both as a vehicle for teaching art and a way for local artists to sell their work.
The GCAA also presents its annual Ballyhoo Festival and at least seven art markets every year.
“I would say that 90 percent of our visitors to the gallery are from out of state,’’ Thomley said. “And it’s mostly snowbirds that respond to the art classes.’’
Vogel thinks it is always going to be hard to pull tourists away from the beach during the summer season. But more businesses at Waterway Village would help.
“It would be better if there were other things to bring people around our area, that is for sure,’’ he said. “Of course, it would be nice to have other kinds of shops and businesses geared towards the arts around our property.
“We get kids right out of college coming in here hoping to hang up their art, and I have to tell them that is not how it works. I don’t want to disappoint them, but it’s a tough business if you want to make a living out of it. We try to promote all of our artists and encourage them to do outside shows besides the art markets.’’
Thomley points out that Tara Alford at Blue Girl Beading around the corner from the GCAA gallery sells jewelry she creates and potter Steve Dark and painter Rick Tino also both have galleries near the GCAA.
She would also love to see a future Waterway Village that includes working studios, pottery and glass shops, melding with ice cream parlors, novelty shops and restaurants that include outside seating.
“I do see the art scene growing here,’’ said Cantrell. “We’ve been trying to cultivate it for a long time. The new art center in Orange Beach and the GCAA Gallery have helped a lot. Before that, there was no place to buy art except for maybe furniture stores and Tino’s Gallery.
“Having all the art education around also helps others to find their creativity and that has encouraged awareness and support for the arts,’’ he added.
The artists featured by Big Beach Brewing on their craft beer cans are all friends and all supportive of each other’s efforts.
“It’s a pretty cool little family of folks,’’ said Cantrell. “We help each other out as much as we can.’’
“We push each other,’’ West added. “We all share what we are doing in our work and share how we are marketing ourselves. Nick and the Swigers are so good about encouraging others to dream. That is what I love that about them so much. They want to make this an artsy town They want people come down here just for the art.’’
“We appreciate the artists that were here before us like Kelly, and what people like Tommy Vogel and Ms. Eloise (Thomley) have done for us,’’ JD Swiger said. “I know there is more of an art scene here now even since we created Swiger Studio in 2017.’’
“There is room for everyone to grow,’’ said Michael Swiger. “Collectively, our cause is the same. Hopefully, we can continue that and be ambassadors for art for the next generation.”
“More people are buying into it,’’ JD Swiger added. “Even (Big Beach Brewing Company general manager Ryan Shamburger) Ryan reaching out to us for his project is exciting. Michael and I want to be part of creating a booming art community. Maybe one day we can be the old guys who helped pave the way for the next generation, just like the older artists have done for us.’’