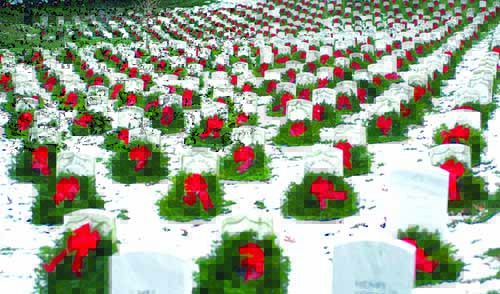 The Kiwanis Club of Big Lagoon is again spearheading the local effort to participate in the Wreaths Across America program to remember and honor our fallen veterans. The club is taking orders for wreaths specifically for Barrancas National Cemetery at NAS Pensacola through Dec. 6.
This year’s Wreaths Across America ceremony and placement of wreaths at Barrancas will be on December 19 beginning at 9 a.m. Wreath sponsorships start at $15 and payment can be made online with credit card or by check using the downloadable mail-in order form. You may pick up the wreaths or the Kiwanians and their helpers will place it for you. For more information, email barrancaswreaths@gmail.com, visit barrancaswreaths.com or call 850-207-1217.
“Take this opportunity to demonstrate your organizations gratitude for the sacrifices made by veterans,’’ said Martin Haygood, a volunteer coordinator with the Kiwanis Club. “We ask that people pease give generously and encourage others to give.’’
The Kiwanians, with help from the Bailey Middle School Builder’s Club and the K-Kids Club, placed wreaths on 12,000 headstones last year, providing an excellent opportunity to teach younger generations about the value of their freedoms and the importance of honoring those who sacrificed so much to protect those freedoms.
Approximately 12,000 wreaths will be placed at Barrancas. This is inspiring, but it still leaves many grave sites unadorned.
Wreaths Across America is formed in 2007 as a nonprofit governed by a Board of Directors. Their day-to-day operations are overseen by Executive Director Karen Worcester.
WAA’s mission is carried out by coordinating ceremonies at Arlington, as well as veterans’ cemeteries in all 50 states. The organization has since expanded to include over 1,000 local charity groups that represent more than 800 cemeteries, military memorials, and other locations. In 2008, and each year since, Congress has issued a proclamation officially recognizing “Wreaths Across America Day” each December.
Pictured: In 1992, 5,000 wreaths were donated by Worcester Wreath Co. Years later, in 2005, an iconic photo of these wreaths in snow (pictured) became a viral sensation.