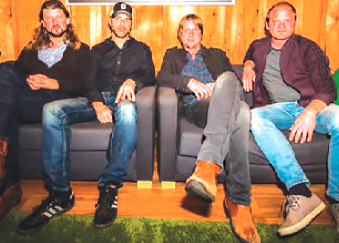 You might expect a band that calls itself Yarn to spin a yarn or two. You would be correct. “That’s what we do, we tell stories, live and in the studio, truth and fiction,” said the band’s Blake Christiana. “We don’t opt for consistency. There’s a different vibe onstage from what comes through in our recordings. There’s a difference in every show as well, you never know what you’re going to get.”
The four time Grammy nominees, touring in support of its “Lucky 13” project (13 song releases in 13 months), will make its debut at the famed Flora-Bama Lounge on Perdido Key this Friday, April 12. Showtime is 7 p.m. and regular cover charges apply.
“These are essentially road stories,” Christiana said about the project. “There’s an overriding theme that links these songs in a very broad sort of way, but again, the stories are not to be taken literally. The intention was to share the feeling of what it’s like to spend time travelling from city to city, with all the unlikely experiences that can be encountered along the way.’’
“While this batch of songs aren’t exactly literal road stories, most deal with some degree of adventure and adversity as inspired by our tours and treks around the country,’’ adds guitarist Rod Hohl adds. “Yet, like any good story, there’s an imaginative element to it as well. That’s why we’ve decided to release alternate versions of some of the tracks, to provide a glance at the oddities that exist just beyond sight.’’
The band spent two years honing their chops during a Monday night residency at the famed Kenny’s Castaway in New York’s Greenwich Village, in effect, allowing them to rehearse onstage.
Playing upwards of 170 shows a year and sharing stages with such superstars as Dwight Yoakam, Charlie Daniels, Marty Stuart, Allison Krauss, Leon Russell, Jim Lauderdale and The Lumineers helped them further hone their craft. They performed at any number of prestigious venues, eventually surpassing 1,000 shows, half a million miles and performances in nearly every state. Countless radio station appearances. Broken-down RVs. A van going up in flames. They’ve paid their dues and then some, looking forward even as they were forced to glance behind.
The Brooklyn and Raleigh based band — which is currently comprised of Christiana, Hohl, bassist Rick Bugel, and drummer Robert Bonhomme — have made their mark, recording five studio albums in addition to their latest project. Lucky 13. They’ve dealt with their own emotions, scars and circumstances, and they emerged in a position to share those experiences with others who have juggled similar sentiments.
The Flora-Bama is, of course, located on the Gulf of Mexico at the state line. Info: flora-bama.com or 850-492-0611.