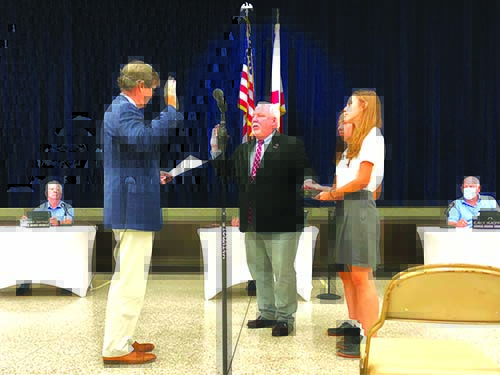 Area growth has led to the creation of two new senior management positions at the City of Foley. Two long-term city managers have been installed into positions that were created to allow for more flexibility and better utilization of skills among like departments.
“The executive director positions are intended to implement a senior management team sufficient to cover the continued and accelerating growth of the city,” according to Mike Thompson, city administrator.
David Thompson was promoted to Executive Director of Leisure Services. In this position, he will oversee the library, Graham Creek Preserve Nature Parks, city parks, horticulture and the senior center, as well as continuing to manage Foley’s recreation and sports tourism programs. Thompson has served as Director of Recreation since 2005. He has headed Foley’s successful Sports Tourism Department that schedules sporting events and manages the city’s sixteen soccer fields and event center since 2017.
David Wilson, Foley’s former police chief, was brought out of a short-lived retirement to be named Executive Director of Public Safety. In this position, he will oversee the police and fire departments and coordinate the city’s emergency management response during times of emergencies. Wilson served as Foley’s police chief from 2007 until 2020. As police chief, Wilson concentrated on leadership development, crime reduction and community oriented policing.
Pictured: Judge Mike Dasinger presiding with David Wilson and his twin daughters and David Thompson with his wife, Christian.