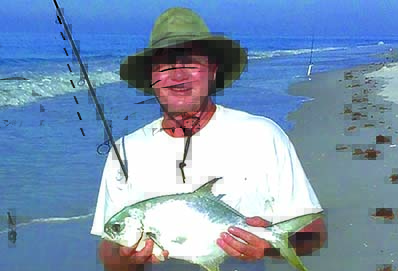 Well, it appears the second half of October will bring some welcome relief from the summer of 2020. We are getting some nice fronts come through now. Those have brought the water temperature down into the upper to middle 70s which is just about average for this time of year. So as one would expect, the fishing along the beaches has been just about as good as we would normally experience. Lighter north winds and calmer seas have allowed the coastal waters to once again clear to the namesake emerald green.
Nature heals itself after a hurricane. And many of the sandy white beaches are rebounding well from Sally’s fury with all kinds of near-shore sandbar structures. In some locations a labyrinth of shallow sandbars and slightly deeper troughs run perpendicular as well as parallel to the shore. These offer sealife a variety of favorable water depths to take advantage of. Fishermen and beachcombers follow suite when they explore these intricacies in search of shells, bait or fish.
Ground Mullet? Whiting? What’s in a name?
A huge variety of invertebrates live in these shifting sands, including sand dollars, coquina clams, mole crabs and beach ghost shrimp. The later make great bait for our cooler water non-migratory fish. Of these, the kingfish also called kingcroakers of the three Menticirrhus species are some of the smaller yet more numerous fish in the surfzone encountered by fishermen during the cooler months. Their name in Latin means ‘chin curly’, a characteristic which all three species exhibit. Littoralis or Gulf kingfish are locally known as whiting. They have a gray back, silver sides and a white belly with a black patch on the tip of the tail. These are most common from 10” to 12” long (over a year old). Though they may live to be 7 or more years old and reach 20 inches in length (almost three pounds). The less numerous Saxitillis or Northern kingfish are a bit smaller and usually more slender in shape. Their sides are marked with several diagonal greenish colored bars. And their dorsal fin is very elongated, making them a very handsome looking fish. Americanus or Southern kingfish are usually found in deeper waters, passes or bays instead of in the shallow surf zone. Though they may be prevalent at times even from the gulf beaches. They too have diagonally oriented light green or gray stripes, and locals commonly refer to them as ground mullet. The widespread use of these local names (whiting and ground mullet) is both misleading and confusing to many anglers unfamiliar with how to tell the three similar looking species apart. Not that that it makes much difference though, because all three species are unregulated as well as delicious!
These fish can be targeted with lighter spinning tackle which allows more sensitivity to their light bite. Many are caught using small pieces of fresh dead or even frozen shrimp, with or without Fishbites. Fishbites is a synthetic flavored bait strip, designed to slowly dissolve when wet, while giving off a scent trail the fish can follow to the hook. Make sure the bait is no longer than your index finger, and no bigger around than your thumb. Since these fish have relatively small mouths and no teeth to bite their food, they must be able to swallow it whole.
Terminal tackle is often a double or single Drop rig, most effective in slightly rough or dingy water. A small, brightly colored styrofoam float or plastic bead may be used as a visual attractor to the hook. That is usually a small circle or kahle style in the number 6 or 4 size or slightly larger. Pyramid weights of one ounce or more are often used with these rigs to better hold it in place on the bottom.
But when the water is calm and clear, a Fishfinder rig (called Carolina rig locally) can be more effective. The scent of the bait is easier for the fish to find and eat lying naturally flat on the bottom. An egg sinker is most often employed because it is stealthier and easily skims along the sand without digging in. This allows the fish to grab the bait and move away a short distance before feeling the line pressure or the hook. Then, as the fish swims away, the kahle or circle hook rotates in its mouth and digs into the tough skin around the mouth. Used unattended in a rod holder, these rigs have very high hookup ratios.
It’s Pompa-yes for Pampano
By now the migratory fish species, mostly in the jack family are on their way to the Florida peninsula for the winter. But pompano is one species that can tolerate water well below the 80 degrees most of their jack cousins prefer. They often inhabit some of the same feeding areas as the kingfish, and may even school with mullet, sheepshead, slot-sized redfish, black drum and speckled trout.
Pompano particularly seem to like feeding along sandbar drop-offs near jetties, passes and piers. Anglers from shore can target these fast swimming fish by lobbing a set rig out to the sand bar slope. Sometimes that distance may be out of normal casting range (beyond 50 yards), but may still be within reach of longer, stronger rods (over 10 feet) capable of casting heavier weights farther.
Terminal tackle and baits to target pompano are very similar to kingfish as well. In fact most double drop rigs are referred to as Pompano rigs. Their mouths are not much larger either, so keeping the hook and bait size small is critical to routinely hooking them.