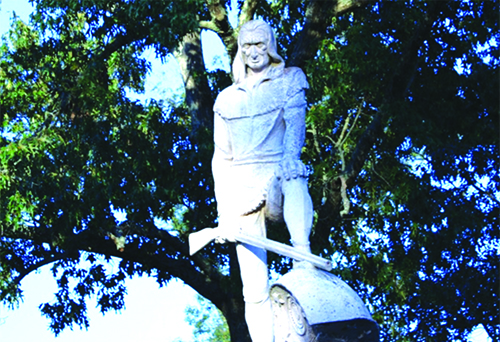 Historian and local author, Mike Bunn, will be returning to the Foley Public Library on Thursday, June 16 at 2 p.m. to give a presentation titled “Sam Dale, Alabama’s Davy Crockett/Daniel Boone.” Seating is limited and reservations are required. RSVP online at foleylibrary.org or call 251-943-1031.
Dale is an Alabama frontiersman who was a key figure in the Creek Wars. He guided settlers down the Federal Road and helped open frontier settlements in southwest Alabama.
Bunn is a public historian who has spent the entirety of his career researching, writing, and speaking about the Deep South’s history and culture. He is currently Director of Operations at Historic Blakeley State Park in Spanish Fort.
Pictured: The General Sam Dale monument at his grave site on Hwy. 39 in Daleville, 15 miles north of Meridian. Dale (1772-1841) was a scout, frontiersmen, soldier, and public servant who played an important role in carving the state of Alabama out of the Mississippi Territory. His frontier exploits, particularly those involving his participation in the Creek War of 1813-14, earned him hero status among early Alabamians and the nickname the “Daniel Boone of Alabama.”
While serving in the territorial legislature in 1817, Gov. William Wyatt Bibb commissioned Dale as a colonel in the Alabama militia. He later became a member of the first General Assembly of the Alabama Territory and served in the state’s legislature from 1819 to 1820 and again from 1824 to 1828. In 1821, he was appointed a commissioner to establish a public road from Tuscaloosa to Pensacola and then on to Blakeley in Baldwin County and Fort Claiborne.