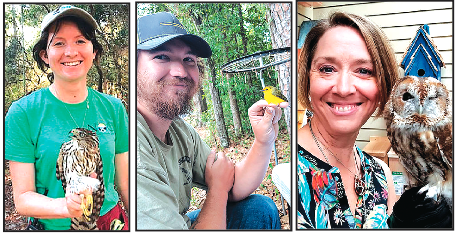 Local non-profit will carry on with fall bird banding at Ft. Morgan
Hummers & other species will be the center of attention from Oct. 1-7

By Fran Thompson
The Banding Coalition of the Americas, a non-profit dedicated to research and education about birds, will host a free public bird banding event in the Ft. Morgan stables area from 7 a.m. ‘til 3 p.m. Oct. 1-7.
Visitors are welcome to observe and participate, and early morning hours are the best time to see the most birds. There is a small entry fee to Ft. Morgan.
For more BCA info, visit bandingcoalition.org or facebook, call Shepard at 251-269-6527 or email kyle@bandingcoalition.org.
“Each year, Ft. Morgan is inundated with thousands upon thousands of migratory birds from hawks to warblers and hummingbirds, all of which can show themselves during this event,’’ said Kyle Shepard, BCA Director of Public Relations and Outreach. “All of our visitors will have the opportunity to see birds up close and soak up as much knowledge as they can.’’
Shepard said BCA will help accomodate visitors who have a hard time walking or are in a wheelchair.
The BCA was formed as an extension of the Hummer/Bird Study Group, which under the direction of Bob Sargeant, started conducting spring and fall bird banding camps at Fort Morgan in 1989.
Sargeant, considered the patriarch of Alabama bird banders, and his wife, Martha, trained more than 100 volunteers how to fit birds with identification so that their movements can be tracked and studied.
The Sargents set up stations, had two vans, 70 nets, and rented houses for their banders. They led educational programs for the public as they released birds.
Bob Sargeant died in 2014, but his legacy lives on through those he taught.
“Our entire board of directors was trained how to band birds at this very site under Bob and Martha Sargent and the rest of the Hummer/Bird Study Group (HBSG),’’ said Shepard.
“We are proud to be carrying on the legacy of the Sargents by continuing the almost 40 years of research they conducted at Ft. Morgan and elsewhere. This event is the perfect place to get an up close and personal look at what bird banding is and learn how our research can help protect the species that live in and pass through our state.’’
Shepard said he first attended a HBSG banding event at Ft. Morgan at the age of 10 and banded his first bird at Ft. Morgan two years later. He said being mentored by leaders in avian field research enabled the BCA directors to form its non-profit.
“It was a very rare opportunity in its own right, but even more so as I was the youngest trainee the crew had taken on at that time,’’ he said.
“We formed BCA as a way to continue avian research and further educate anyone who will listen about the species around us as well as the vital role that our coastal ecosystems play in migration,’’ he said.
For more BCA info, visit bandingcoalition.org, facebook or call Shepard at 251-269-6527.
“Early morning is usually the best time to see the most birds. However, predicting birds is a very hard thing to do,’’ Shepard said.
Shepard said he and fellow directors Emma Rhodes, and Julia Elliott (pictured above) started with the Hummer/Bird Study Group (HBSG).
“The reason we are the banders and researchers we are today is thanks to Bob and Martha Sargent. They took us under their wings and trained us at the Fort Morgan State Historic Site banding station in Alabama, an operation the Sargents ran for over 30 years. It is our mission to continue their legacy,’’ he said. “Like any successful non-profit, the Sargents needed a hand with running such an incredible program. Along with the honor of joining the ranks of HBSG, we were always surrounded by accomplished banders who were willing to share their vast knowledge from their many decades of work.’’