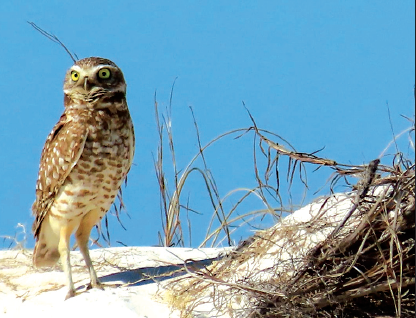 A very rare burrowing owl was observed in the dunes at Gulf State Park earlier this month by Olivia Morpeth, an Alabama Audubon Coastal biologist, while she was conducting a permitted survey. This is the the first sighting that’s been reported at Gulf State Park in over 20 years of bird monitoring, according to a GSP post. Alabama Audubon biologists and volunteers survey and monitor the coastal birds at GSP year round
The owls live in grassland or dune habitats. Typically, their range is through the western portion of the United States and south of Florida’s panhandle. The owls live in the dunes and dig out burrows to make their nests.
This sighting is a testament to the dune restoration efforts of GSP staff and volunteers, including the recent Christmas tree recycling program and native dune planting held in conjunction with Gulf Shores City Schools.
Other GSP dune restoration and conservation partners include Alabama Audubon, USWFS, Dune Doctors and many community volunteers.
(Olivia Morpeth, Photo)