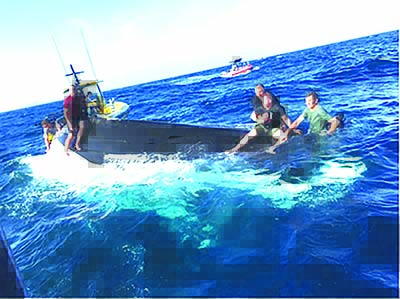 Gulf Shores American Legion Post 44 will honor the Coast Guard with a special birthday tribute on Friday, August 3 at 7:30 p.m. Post 44 is providing a free ribeye steak dinner to its members that are Coast Guard veterans. The U.S. Coast Guard celebrates their 227th birthday on August 4.
The Coast Guard, formed when the first Congress authorized the construction of ten vessels to enforce tariff and trade laws and to prevent smuggling, is one of the oldest organizations of the federal government and, until the Navy Department was established in 1798, they served as the nation’s only armed force afloat.
Today, the Coast Guard performs a multitude of missions for our nation, especially in the Gulf Coast area. They patrol the coastline and inland water ways for our safety and security. The men and women of the Coast Guard are typically called Coasties. They also serve as first responders and perform humanitarian services to people in distress or impacted by natural and man-made disasters whether at sea or ashore. In times of war, or at the direction of the President, the Coast Guard serves as part of the Navy Department.
The American Legion is the largest wartime veterans service organization in the United States. It was formed in 1919 at the end of WWI. Members are veterans of the U.S. Armed Forces, to include the reserve and National Guard, that served during wartime. These veterans are “still serving America.”
Post 44 is located at 6781 Hwy. 59. For more info, call 251-948-6119.
Pictured: Five boaters on a capsized boat await rescue while a Coast Guard Station Lake Worth Inlet crew and good Samaritans approach the vessel three miles east of Lake Worth Inlet.