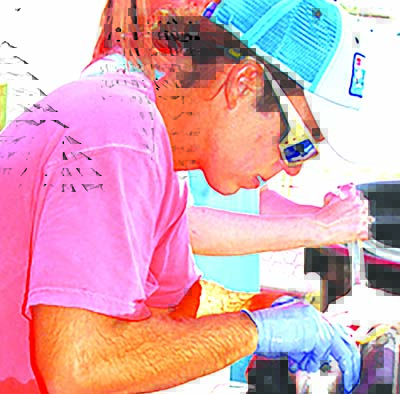 Coastal Alabama Acoustic Monitoring Program tracks redfish & speckled trout
“A lot of the red drum really didn’t move that much from where they were actually tagged.”
By David Rainer
AL Dept. of Conservation and Natural Resources
While the fanfare surrounding the Alabama Deep Sea Fishing Rodeo (ADSFR) proceeded nearby, Reid Nelson deftly made a series of surgeon’s knots to sew up an incision on the belly of a redfish that was a part of the live weigh-in category at the rodeo.
Nelson, a graduate student in the University of South Alabama’s Marine Sciences Department, inserted an acoustic tag in the redfish, red drum if you’re a purist or marine scientist, as part of the Coastal Alabama Acoustic Monitoring Program (CAAMP).
CAAMP monitors 55 receiver stations strategically placed in Alabama coastal waters to catch pings, which happen once a minute during the one-year lifespan of the acoustic tags in the fish.
Nelson said 100 red drum were tagged in 2015. In 2016, another 100 red drum were tagged. Also in 2016, all tagging that didn’t occur at the ADSFR was transferred to Dog River and Fowl River on the western shore of Mobile Bay.
Nelson said the goal of CAAMP is to study fishing mortality, natural mortality and fish movement in response to water temperature and salinity levels.
Last year, the team added speckled trout to the tagging program and will continue to work with trout this year. As expected, redfish is a hardy species that handles catch-and-release very well. Speckled trout are not quite as resilient but still survive well enough to justify the live-release effort.
“With the popularity of the live weigh-in at the rodeo, we looked at it as a nice opportunity to tag live fish from different places,” Nelson said. “You can actually look at how successful live weigh-ins are. What we have seen from fish tagged at the rodeo, about 98 percent of the red drum have lived. About 78 percent of the speckled trout that we tagged at the rodeo have lived.
“Overall, mortality is pretty low, which I think is amazing. Some of the red drum were brought from all over, as far away as Mississippi and Louisiana.”
Nelson said 20 red drum and 15 speckled trout were fitted with the acoustic tags, which cost about $300 each, and released during the 2018 ADSFR. CAAMP is funded through the Alabama Marine Resources Division with a grant from the National Fish and Wildlife Foundation.
“What was really interesting about the rodeo is the map where the fish came from that were released at the rodeo,” he said. “One of the main concerns about a live weigh-in program is the fish won’t leave that area once they are released. Unlike the fish we tagged in the rivers, the fish we tagged at the rodeo leave Dauphin Island pretty readily. We’ve detected those fish as far away as Raft River in the Mobile Delta. We’ve detected them in Fowl River. We’ve detected them off the Gulf State Park Pier. They have even been detected by receiver arrays that other groups have out. It’s really remarkable how quickly and widespread these fish disperse.
“It’s interesting to do science with a part of the tournament. That’s really never been done. Another interesting thing is fishermen have been really good about telling us where they caught the fish. What we have seen is about 25 percent of the fish have gone back to where they were caught. With red drum that were caught in the rivers and brought to the rodeo, about 70 percent of those fish will disperse and end up returning to one of our local rivers. That’s been an amazing aspect of the study. We have no idea how those fish find their way back. It could be olfaction or chemoreceptors. It’s probably a combination of many navigation senses.”
Natural mortality with the red drum tagged in the first year of the study has been surprisingly low, according to Nelson. Out of the 100 fish tagged, only three died of natural causes. Fishing mortality took 10 out of the population in Fowl River from 2016-2017, and nine redfish were lost to fishing mortality in Dog River during the same time span.
“One of the other interesting things we saw is the seasonal peaks in the rivers,” Nelson said. “We saw more fishing mortality in the fall and spring.”
An eye-opening aspect of the CAAMP data when speckled trout were added to the study is the significant disparity in movement between species in response to weather and salinity changes.
“One of the most interesting things we’ve seen is a lot of the red drum really didn’t move that much from where they were actually tagged,” Nelson said. “Out of Fowl River, we had 13 fish leave the river over the course of the year, which is not very many in the grand scheme of things. Only five left Dog River during that year. For the year we have data, they were pretty much resident fish. Some of them would use different parts of the river. But for the most part, they tended to remain in the area where they were originally tagged.

“In fact, we had a family call in a fish a few months ago that had been tagged about a year ago. They literally caught that fish where we tagged it at Delta Port in Fowl River. That was amazing.”
Nelson said the most movement observed during the study came in December of 2016 when the water temperature was cooler than normal and the salinity was very high because of a lack of rain in the fall.
“The big conclusion so far on redfish is the majority of the slot fish tend to be resident,” he said. “It looks like they are pretty resilient to changes in temperature and salinity. We’ve seen big fluctuations in those two factors, and the fish didn’t leave the rivers when the salinity and temperature varied quite a bit. I thought that was really interesting.”
Now, throw speckled trout into the study, and the movement patterns are vastly different.
“During the first year of the big study with speckled trout, it was almost the complete opposite story,” Nelson said. “The trout were tagged last November and December. They were resident in the deep holes in the rivers until about February. When it was really cold, they were staying in the rivers. Once it started to warm up, we saw a push of fish leaving the rivers pretty quickly, moving down to Mississippi Sound and Dauphin Island. That is what you would expect.
“We had a couple of fish that moved from Dog River to the Mobile River. One of those fish actually came in at the rodeo. Instead of staying in the river, they pushed out relatively quickly.”
Nelson is also working with another program to study fish movement. The TAG Alabama program is sponsored by the Coastal Conservation Association of Alabama and relies on local anglers to insert dart tags in red drum and speckled trout caught in Alabama coastal waters.
“What we’re seeing with TAG Alabama is that many of those redfish are coming back right close to where they were tagged as well,” he said. “With TAG Alabama, we get a much larger spread of tagging locations instead of just the rivers.”
Anglers participating in TAG Alabama go to the website at tags.usouthal.edu/ to log tagging and recapture efforts for trout and redfish as well as red snapper, tripletails and sharks.
“We’ve had 743 red drum and speckled trout tagged so far,” Nelson said. “Considering we launched the program in April this year, that’s a lot. We’ve had 65 of those fish recaptured.
“I’m excited about this. CCA Alabama is providing the funding for this. I’m hoping we can keep this going.”
Another tagging effort that occurred partially during this year’s ADSFR involved tarpon, known as the silver king.
With the help of local tarpon enthusiasts during the ADSFR, researchers from Dauphin Island Sea Lab and Mississippi State University managed to attach eight satellite tags. Two more tarpon were caught and tagged the Saturday after the rodeo.
Of the eight fish tagged during the rodeo, all but one high-tailed it toward Louisiana, one traveling as far as the southern tip of Louisiana near South Pass. One fish, however, decided to explore Mobile Bay and made a huge loop inside the bay before heading west.
Pictured: Reid Nelson carefully inserts an acoustic tag into a redfish during the live weigh-in competition at the Alabama Deep Sea Fishing Rodeo. (Photo by David Rainer)