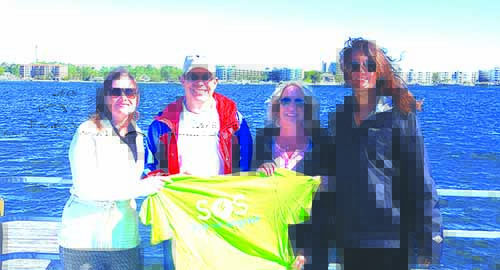 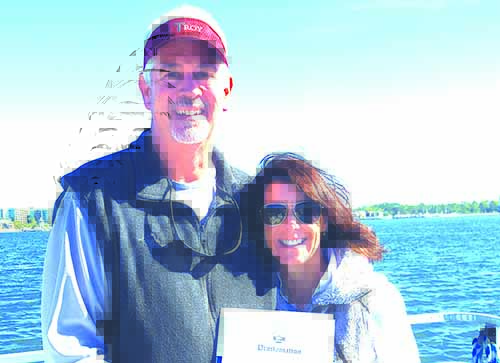 The Alabama Coastal Foundation (ACF), City of Orange Beach, Islands of Perdido Foundation hosted a press conference on the waters off Bird Island to officially designate Friday, April 7, 2017 as Orange Beach Seagrass Day. The purpose of the day is to bring attention to the Islands of Perdido Foundation’s Save Our Seagrass education campaign. The campaign centers around raising awareness of the value and needed protection of the vital seagrass beds in the area.
City Councilman and Islands of Perdido Foundation trustee, Jeff Silvers read the proclamation.
A main focus of the Save Our Seagrass campaign is educating people about avoiding these sensitive habitat areas while out recreating via putting out new signage at boat launches, working with area boat and jet ski rental companies, and lessons plans taught in local 5th grade classrooms. The aim is to ensure existing seagrass is protected and conserved, and hopefully even increased.
The designation is a special reminder of Orange Beach’s valuable seagrass habitat and all the benefits it provides our community, as well as the great responsibility of preserving it for future generations.
The Islands of Perdido Foundation wa formed to raise awareness and involvement in preserving Robinson Island and surrounding smaller islands (Bird, Walker, Rabbit, and Gilchrist) in Orange Beach, with emphasis on preservation, restoration, research, and education.
The City of Orange Beach purchased Robinson Island in 2004 for $4.2 million. The procured a BP funded grant from the National Fish and Wildlife Foundation to purchase Walker Island for $162,000 in 2013.
“I believe in the small, local projects,” said Phillip West, coastal resource manager for the city in a NWF website story about the purchase. “Some folks say it’s a whole lot better to protect big spaces. I get that.
“But we’re in a largely urban environment. You can’t tell me that pocket wetlands or pockets of habitat spaced throughout [the area] don’t serve a meaningful role. We’re in this neotropical migratory songbird flyway and they don’t want to just land on condo roofs.”
“Having survived the ravages of nature, dredging, drilling, boating and building, Robinson Island faces a new challenge: sun worshippers who set their anchors, chaises and coolers on its beaches and walk their dogs on its sand and grass,’’ said Bob Serata on nwf.org.
The Alabama Coastal Foundation’s mission is to improve and protect Alabama’s coastal environment through cooperation, education and participation. The organization pursues practical solutions to conservation challenges in a non-partisan manner and is dedicated to partner with businesses, local government and other non-profits to achieve common ground solutions to our environmental problems.
To learn more about programs, become a member, or volunteer, visit joinACF.org.
Pictured: Staff of the Alabama Coastal Foundation. From left to right: Valerie Longa (Outreach Coordinator), Mark Berte (Executive Director), Ginny Barnas (Public Engagement Coordinator), Katherine Kuhn (Spring Fellow); Jeff Silvers & Tracy Holiday.