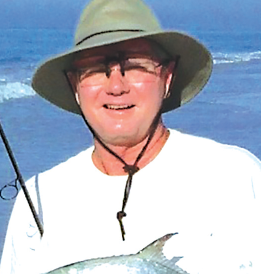 Right on cue it seems winter’s chilly grip has been slipping a bit the past couple of weeks. In fact, we could experience one of the year’s most dramatic transformations during this current fortnight. Spring is quickly making inroads along the north central gulf coast, with air and water temperatures nudging consistently through the 60s. We may not be quite done with cool weather completely, but it is definitely on the way out as the Vernal Equinox is upon us March 20. So hours of daylight are getting longer now, and the change to Daylight Savings Time (on March 13) will extend the appearance of that even more.
Fish in the surf zone are already becoming more active as sheepshead are gathering to spawn in the Gulf with the moon becoming full on March 18th, which coincides with a NEAP tide period. More pompano have been caught during the past two weeks than the through the previous two months. And we can expect that trend to increase as many more move into the surfzone while water temperatures climb through the middle to upper 60s.
Another sure sign of spring, is the arrival of Spring Breakers and spanish mackerel from middle to late March. These true pelagic mackerel migrate into our waters from southwest Florida this month. They arrive lean and hungry from their long journey, so catching a limit (15 per angler, per day) is often not all that difficult once you find them and set on the pattern. The first spanish of the year are often landed from the south end of the Alabama Point west jetty during the first or second week in March. Soon after that some begin showing up at the Gulf State Park Pier just outside the longshore sandbar. Gotcha plugs are favored lures for catching these fast striking mackerel. But medium sized spoons and especially ½ to ¾ ounce white and yellow leadhead jigs can be quite effective early in the season. In this cooler water, the spanish seem to hang close to the bottom.
So a fast sinking lure worked quickly up a few feet off the bottom is often the best way to get their attention. Plus the single hook or lone treble hook are much safer for anglers, which may line up elbow to elbow when the action gets fast and furious and word or “the mackerel run” spreads. Be sure to tie on a foot or so of heavy (30-40 pound), clear monofilament line as protection from those razor sharp mackerel teeth. And pack some needle-nosed pliers to make hook removals less perilous.
Bleeding your mackerel by cutting or breaking the gill rakers will make them even tastier when cooked. I dunk my still kicking fish head first into a 5 gallon bucket halfway filled with water. After the fish stops wiggling it can be placed in a cooler without near as much bloody mess.
But spanish aren’t the only game in town, because the sheepshead bite is usually at its peak during this period too. Plus the pompano action is getting more dependable with every day the water temp rises. Add to that more activity from whiting, in addition to occasional slot sized redfish. Live shrimp work great for all these fish, but supplies sometimes lag behind demand. So check with the baitshops and adjust your plans accordingly. Fiddler crabs are still a dependable backup bait for sheepshead. And bull minnows work great for flounder, and even slot sized redfish. Yes, some flounder are already showing up along the beaches and in the passes. So we can expect to see some of them too.
In fact beach fishing should be picking up more in general now too. With more pompano and whiting being reported, along with some redfish and black drum. Ghost shrimp is still the best bait overall, but as the water warms more fish may be taken on fresh dead shrimp, Fishbites or Fishgum. The pier has been a bit more productive recently, and we can expect that to improve even more once the spanish mackerel show up, as long as the sharks don’t take over. Little Lagoon Pass can still provide good fishing at times, though the dredging operation is about to resume (Monday through Friday 8am to 4pm). Remember paying to park at the venues in Gulf Shores has resumed (March 1 through November 30), so be prepared for that as well. But check out the newly opened free parking facility just over the Florida State Line called Perdido Key Access #4.
Day to day weather, and how the amount of sunlight, wind and waves affects the fish feeding habits due to water clarity plays a huge factor in the characteristics of what is biting and when. And of course, the tide movement has a role in that equation as well. So solving the riddle of being in the right place at the right time and rigged up the right way become the keys to angling success.
Communication among anglers helps disseminate pertinent information that lends toward more overall success for all. So be observant of any patterns of fish behavior that may help you anticipate and participate in the action. Remarks from others that begin with “You should have been here an hour ago.” Or “We tore them up here yesterday, last week, etc.)” are commonplace, and should be taken with the same ‘grain of salt’ the weatherman provides in relation to our rapidly changing conditions.
The old adage about March “coming in like a lamb, and out like a lion” holds a lot of truth because we are in the midst of dynamic seasonal fluctuation. That can be frustrating for the unprepared, and even experienced anglers may be fooled at times. But overall, we should be seeing more ‘catching’ through this month.