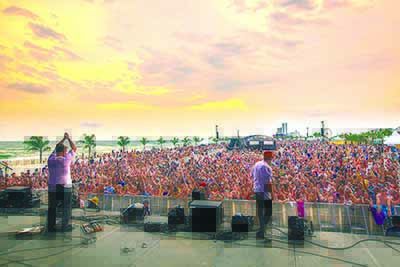 Rumors swirl: Was this the last Hangout Fest?
By John Mullen
Phones were blowing up over the weekend in Gulf Shores as the rumor mill was at full grist about the future of the Hangout Music Festival.
“I’m personally glad the Hangout Music Festival is over,” Mayor Robert Craft said. “We had really good operations, we didn’t have really anything extraordinary occur. We’ve got it behind us and it was a good weekend.”
Also, during the work session, the council discussed preliminary moves toward developing an emergency room clinic at the former Sacred Heart building near the airport and (see sidebar) security concerns with Gulf Shores schools.
But is the Hangout Music Fest moving? That seemed to be a prevailing question all over town during the ninth annual show.
“There have been significant discussions and rumors flying around about it may be leaving,” Craft said. “We have had no discussions with Shaul (Zislin) along those lines. Thirty days after the event is over we will sit down with him and discuss and figure out where we go from here. There are a lot of options that we have moving forward.”
City Administrator Steve Griffin said there are seven years left on a 10-year agreement between the city and the Hangout officials. It’s reviewed every year for possible problems to address and seeking better ways to operate. The city has the option of stopping the show if it believes the festival has grown too rowdy or become too much of a burden on the city during its four-day run.
“Our phones were ringing from citizens about noise and traffic which was overwhelming at times,” Craft said. “Our challenge is to try to explain all the things that we’re doing and the money that we collect. It balances out. This is what you give up, this is what you get.”
Sacred Heart Building
The city is making moves toward applying for a certificate of need to establish an emergency room facility in the former Sacred Heart building. The council discussed hiring attorney John T. Mooresmith for consulting during the certificate of need process with a free-standing emergency department, Economic Development Coordinator Blake Phelps said.
Craft said ambulances have trouble getting to the emergency room at South Baldwin Regional Medical Center in Foley via a crowded Alabama 59. “If we can get this established here we don’t have to go there,” Craft said. “They can stop at our facility. That way we can provide the immediate care they need in those situations. It is almost impossible to fix the roads to get to South Baldwin. That’s a great opportunity for us and we’re well on our way to making that happen.
The council also discussed:
• Finalizing a lease agreement with the Gulf Shores City Board of Education for the board’s Central Office. Recently the Harry Roberts Community House was renovated to accommodate the superintendent and his staff.
• The annual financial audit which added $2.7 million to the city’s general fund for a total of $29.1 million. The audit conducted by Grant, Sanders and Taylor reported no major findings.
• Awarding a bid to Spot On Painting for $43,350 to paint restrooms, pavilions, dugouts, press boxes, signs and other buildings at the Sportsplex.
• Approving a change order with John G. Walton Construction to add about $23,000 for additional asphalt on Clubhouse Drive, Callaway Road and Sandpiper Lane and ADA compliance work on sidewalks on West Second Avenue. The change raises the amount for the paving and other work to more than $643,000.
• An assembly permit for Surf Style Retail Management for an event at the Gulf Shores Skate Park in Sims Park on June 21
• Reappointing Mary-Alison Bauer and appointing Doug Hillis to the Library Advisory Board and reappointing Vince Lucido to the Building Board of Adjustments.