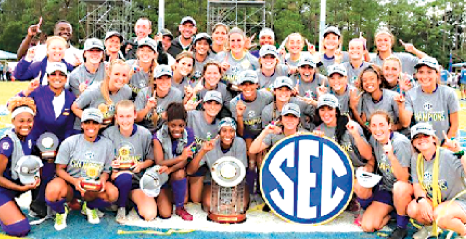 First round matches in the SEC Women’s Soccer Championship between the respective 10th & 7th seeded teams and 8th & 9th seeded teams are scheduled on Sunday, Nov. 3 at 1 p.m. and 3 p.m. at the Orange Beach Sportsplex.
The quarterfinals will be played on Tuesday, Nov. 5 at noon, 2:30 pm., 5 p.m. and 7:30 p.m., with the surviving semifinalists set to play on Thursday, Nov. 7 at 3:30 p.m. and 6 p.m. The tourney final will be played on Sunday, Nov. 4 at 2 p.m. and will be televised live on ESPN.
The tourney bracket will include the top 10 teams in the conference based on winning percentage of conference games (regardless of division). The winner receives the SEC’s automatic bid to the NCAA Division I Women’s Soccer Championship.
The NCAA field of 64 teams includes 31 conference champions; the balance of the field is selected at-large by the NCAA Division I Women’s Soccer Committee. At least four other SEC schools, including Alabama, are expected to earn at large bids.
Orange Beach has a contract to host the women’s title tournament through 2020. The O.B. Sportsplex is located at 4389 William Silvers Pkwy., about 1 mile west of the Foley Beach Express exit on Canal Road. Tickets will be available at the gate. Adult tickets are $5 per game and children (K-12) are $2 per day.
LSU (pictured), which entered the tourney as a seventh seed, beat the Arkansas Razorbacks in the 2018 SEC Tournament championship match.
The top 10 SEC teams going into last weekend’s matches were: South Carolina, 11-1-1; Arkansas, 11-2-1; Florida, 9-5-0, Texas A&M, 10-2-3, Alabama, 8-4-3; Vanderbilt, 10-3-1; Auburn, 6-6-2; Ole Miss, 8-4-3; Georgia,6-6-2; and Mississippi State, 7-6-1.
The 2017 season reaffirmed the SEC’s prominence in the women’s soccer. The SEC had a league-record nine teams selected to participate in the 2017 NCAA Tournament. It marked the 10th time in the last 11 seasons that the SEC has had at least six teams advance to postseason play. The Division 1 Women’s NCAA College Cup will be played Dec. 6-8 at Avaya Stadium in San Jose.