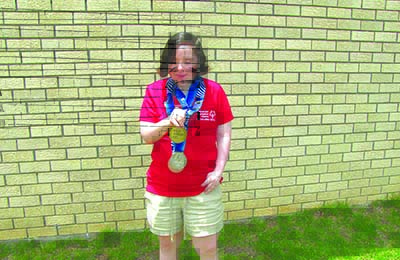 Sissy Flanigan “swims for the gold” at at Special Olympic Games in Seattle
By Sally McKinney
In May, Sissy Flanigan’s friends and family were chanting, “Go, Sissy! Swim for the Gold!” And she did. As a member of the Alabama Summer Special Olympics team, Sissy won three medals, one of each kind, a bronze, a silver and a gold at the 2018 Special Olympics USA Games held in Seattle.
The Weyerhaeuser King County Aquatic Center in Tacoma where the swim events were held was awash with Olympic hopefuls, ready to swim for the gold. It was Sissy’s team that took the top prize in the 4x25M Relay. Sissy represented Baldwin County; Leslie Thomas, Colbert/Lauderdale, Brandi Nuians, Shelby County and Amanda Roberts, Tuscaloosa.
Sissy has been swimming with the Gulf Shores Starfish Special Olympics Swim Team for about 16 years, stacking up at least 50 medals. In July in Washington, in addition to the gold medal, she added a Silver medal for the 50M Freestyle and a Bronze for the 50M Backstroke competition.
“It was awesome,” said the Special Olympian. Other than winning the medals, Sissy says the best part was having her family there to cheer her to victory. Leaving from Birmingham, her sister, Bridget and her two children, Eli and Dottie, accompanied Sissy’s Mom, Judie.
Her sister Sarah and her three children, Libby, Lucy and Cooper, arrived from Tallahassee and as a surprise, her brother, Drew and his wife, Christy, flew in to witness the first qualifying race.
In addition, Sissy made some new friends, especially her three roommates at Willow Hall on the University of Washington Seattle campus.
The excitement began when the Alabama representatives left on a Southwest charter on June 30, arriving in time for the opening ceremony on July 1. For Sissy, there were some open times and days, so she and her family took advantage of the special sites of northwest Washington, Seattle and Tacoma. They visited the Space Needle, enjoyed a picnic and fireworks at the Lake Union Park and attended a Mariners/Angels game at Safeco Field.
There was also a Healthy Athlete program where volunteer doctors and dentists provided examinations for the participants, checking eyes, ears, teeth and feet.
Guiding the Alabama Olympians on their quests for the Gold were Skylar Cooley, Therapeutics Coordinator, Decatur Parks and Recreation; John Huling, Opelica Parks and Recreation, Manager of S