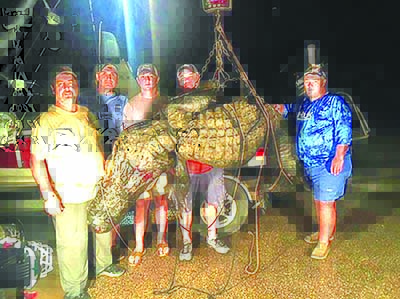 Still trying to figure out how to get his gator in the house
13 ft., 667 lb. monster was largest of the year in Southwest Zone
By David Rainer
Al. Dept. of Conser. & Nat. Resources
With the 2018 Alabama alligator seasons underway, Rodney Young is now faced with a dilemma.
His problem is how to get the monster gator he and his team bagged last year into his house.
Young tagged a 13-foot gator that registered 667 pounds on the scale last year in the Southwest Zone, the largest gator of the year.
Young decided to have a full-body mount made and plans to put it in his home in Stapleton when the taxidermist is finished later this year.
“I’m going to put him in my man cave over the garage,” he said. “I’m hoping it’ll go up the staircase. If not, I’m going to have to get a crane or lift of some kind and put him through the window. I haven’t figured that out yet.”
Young and his team faced a similar situation last August during their gator hunt in the Mobile-Tensaw Delta. Young admits they were lucky to find a big gator because they hadn’t done any scouting.
“We were just rolling the dice, running up and down the rivers,” Young said. “We saw a bunch of 10-footers. This was my first hunt. I was out with some buddies of mine who had been on several hunts through the years. We’d see one and my buddy Gary Goins would say, ‘Nah, ain’t big enough.’”
About 2 a.m., the team was running up the Tensaw River when one of the crew shined a light on the bank and spotted a big gator in a man cave of his own.
“All we could see was the tip of his nose and his eyes,” Young said. “But we knew right then it was a good one. We were probably 100 yards away, but we knew we were onto something.
“He was in what looked like a little cove. The way the willows were, it created a little pocket and trees had grown over the top. We were having to cast sideways. We’d hit limbs and trees, and the gator would go down. That happened four times. We’d fool with him, and he’d go down. We’d back out in the river and watch for him. About 30 minutes later, he’d pop back up.”
Then the big gator made a fatal mistake. He abandoned his cove.
“We were setting up to watch him again when one of the guys yelled, ‘He’s running,’” Young said. “He was tired of us fooling with him, and he came out into the river. We spun around and got two lines in him. That was an hour-and-a-half into the process. Of course, then the fight was on. He’d go down. We tried to keep two lines on him with treble hooks. He’d spin and pop one off. Then we’d get another one in him.”
After the team finally got the gator under the boat, Young donned a pair of gloves and grabbed the large line with a snatch hook. Young hooked the gator but it didn’t come up right away.
“When he finally got to the surface, his head came completely out of the water,” he said. “That’s the first time we got a good look at him, and we realized we had a monster.”
The team finally wore the big gator down and secured him to the side of the boat at 5 a.m. Young dispatched the gator with one shot.
“At that point, we were as worn out as he was,” Young said.
Then Young’s team was faced with another dilemma. They were in Goins’ Blazer Bay boat because of motor problems on their boat that was designated for gator hunting, and Goins didn’t want the gator messing up his almost-new boat.
“He told us, ‘We can take the Blazer Bay, but we’re not putting that gator in the boat,’” Young said. “We said, okay we’ll tie him off. Bear in mind, we shot that gator at 5 o’clock. We realized we would never make it back to the weigh station before it closed if we had to go back to the launch and then drive to the Causeway.
“Gary was sitting there with his head in his hands. Finally, he said, ‘The heck with it. Put him in the boat.’ We didn’t bat an eye. We weren’t going to give him a chance to change his mind, so we started pulling the gator in the boat. It took all five of us to get him in the boat. Then four of us had to go to the bow of the boat to get the boat up on plane. But we got to the weigh station in time.”
Although Young has applied for a tag this year, he said he knows the point system implemented in 2014 will put him at the bottom of the list for 2018.
“I figure it’ll take another two or three years to get another tag. It took me seven years to get the first one,” he said.
Pictured: Rodney Young shows off his 13-foot alligator taken last year in the Mobile-Tensaw Delta. Young to help from, left to right, Gary Goins, Brad Goins, Tommy Antoine and Ashley Wilson to subdue the 667-pound gator.