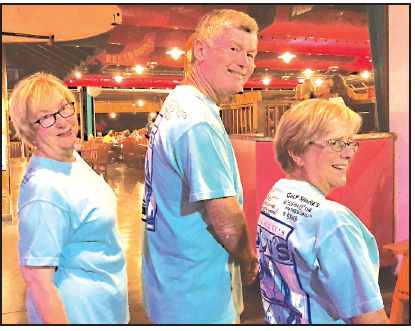 Three LuLu’s. One Day. Could It Be Done?
Lynda Sims & Susan & Rich Owen enjoy meals at all three LuLu’s

Talk about spreading the Gumbo Love! Susan and Rich Owen and Susan’s crazy sista, Lynda Sims, recently attempted the ultimate LuLu’s Grand Tour…In one day!
Longtime LuLu’s patrons and lifetime Parrotheads Susan and Rich were sitting around the bar at LuLu’s in Gulf Shores, chatting with bartender Jilly when Rich got to thinking. “Has anyone ever done all three LuLu’s in one day? Because I think it could be done.” And a challenge was born. North Myrtle Beach to Destin to Gulf Shores? Even for Rich, a glider pilot and former Navy fighter jet pilot no stranger to flirting with the edge of what’s possible, this would be a doozie! Could they pull it off?
Needing a little more encouragement to see if the idea was viable, they did their due diligence by hitting LuLu’s Destin a few days later, consulting with bartender Chase. Manager Chas also gave his expert opinion: “Good idea!”
There was only one way to find out if it really could be done. “How about Tuesday?” Rich suggested.
A few nights after their barstool brainstorm, the adventurous trio were on a Delta Airlines flight to North Myrtle Beach. They’d need to get a good night’s sleep. It would be a big day ahead. The entire crew at LuLu’s North Myrtle Beach was waiting on them when they pulled into the parking lot at precisely 11:00 a.m. the next morning. It was go time.
They set an alarm for one hour, just enough time for a cocktail, a salad, gumbo, and a cup of she-crab soup, a LuLu’s North Myrtle Beach specialty. Before they left, they each got their LuLu’s t-shirt signed by the manager Lauren with the time they’d arrived. Then they were off to the airport for a flight to Ft. Walton Beach where they’d left a car.
They drove to Destin to spend a pleasant hour with their buddy Chas, who was waiting to sign their shirts and mark the time: 6:07 p.m. Would they be able to eat and still make it to Gulf Shores before closing? Following a meal of delicious crab claws, they had a long drive ahead of them to ponder the possibility.
After two hours and fifteen minutes, they arrived at their ultimate destination, LuLu’s Gulf Shores. The time was 8:53 pm. Mission accomplished, it was time to celebrate. They closed the place down.
Yes, the ultimate LuLu’s One-Day Tour is possible, but it may not be for the casual enthusiast. This adventure might be best saved for those with the wings of a seasoned Parrothead, the appetite and thirst of a LuLu’s regular, and the powerful presence of a crazy sista. Sound like anyone you know?