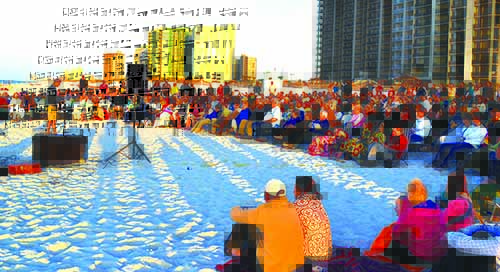 Worship on the Water at sunrise, 9 & 11 a.m. on Flora-Bama Beach
Voice’s Mary Sarah to debut gospel song; fun & games for kids under tent during later services
Worship On The Water at the Church at The Flora-Bama will have three special services this year on Easter Sunday morning (April 16). The church congregation will set up large tents on the beach to hold all three services with near-unlimited capacity and much more elbow room. Services will start with a special Easter Sunrise experience at 6:30 a.m., followed by two more at the church’s regular times of 9 a.m. and 11 a.m. The church will also use the tent stage of the Flora-Bama for a fun children’s event area during the 9 a.m. and 11 a.m. services. Children will enjoy games and fun under the tuteledge of church volunteers. The kids will have a great time playing while parents worship on the beach.
This year’s musical guest, semi-finalist on NBC’s “The Voice” and rising country music star, Mary Sarah will be performing at 9 a.m. and 11 a.m. with the debut of her gospel song “Come To Me.”
Sarah catapulted into the national spotlight came through NBC’s The Voice where she finished #5 place competing on #TeamBlake in 2016.
The 21-year-old singer and songwriter Mary Sarah made history by being the youngest artist to record an album of duets with some of country music’s biggest names, on 12 captivating songs.
Amazed by the Texas ingénue’s voice and talent, Dolly Parton, Willie Nelson, Merle Haggard, Vince Gill, the Oak Ridge Boys, the late Ray Price all signed on to sing duets with Mary Sarah on their most iconic hits.
Dolly’s “Jolene,” Willie’s “Crazy” and Merle’s “The Fightin’ Side of Me” are just a few of the songs interpreted by Mary Sarah and her A-list collaborators.
Produced by Kent Wells, long time guitarist, producer, and band leader for Dolly Parton, the project was also overseen by executive producer, the late Freddy Powers who helped Mary Sarah assemble her dream team of collaborators.
Mary Sarah made her Grand Ole Opry debut on May 31, 2016, and looks forward to gracing the iconic stage more frequently in the future.
Born in Oklahoma, Mary Sarah grew up in Richmond and graduated from Foster High School. When asked about her experience on “The Voice” by Joe Southern of Fortbendstar.com, she said it was amazing.
“When Adam Levine first turned his chair, I was like ‘I’m done, I’m in, that’s all I need. I just needed one chair.’ And of course I wanted Blake (Shelton) to turn, but to have all four was just absolutely humbling and amazing. It was a great way to start off the Voice journey,” she said.
Mary Sarah first stepped into the spotlight when the Oak Ridge Boys asked her to join them on stage, after hearing her on a YouTube video when she was 15.
She told fortbendstar.com the secret to success is hard work.
“I think the one thing I would say is there is going to be a ton of no’s, and never take it personally because usually it never has to do with you,’’ she added. “When you get a no is there’s eventually going to be a yes, so you’ve got to keep going.’’