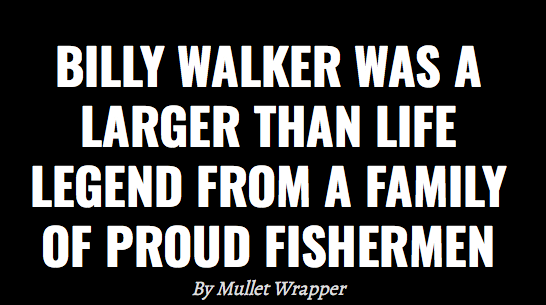 By Zana Price
Captain Willard “Billy” Eugene Walker, age 80, passed away at home with hospice care Saturday, August,11, 2018 surrounded by his devoted wife, Lois Gale Steadham Walker, of 58 years and many loving family members. Billy and Lois Gale were high school sweethearts, he a Foley High star football player and she a cheerleader. They were truly soul mates.
Billy contributed much to the local color of Pleasure Island over the years. Billy Walker’s roots ran deep as a third generation Walker fishermen. He was intrical in the development of the Charter Fishing industry development and had a reputation as being the best.
His parents Rufus E. and Emma Willis Walker and brother Rufus “Bo” Walker preceded him in death. Lois Gale and Billy have two children Guy Rufus Walker and Billy Gene. Their grandchildren and great grandchildren both biological and through marriage are numerous. Billy was considered to be a father or grandfather influence to many over the years.
He was larger than life. When he walked into a room, his booming voice and magnetic personality filled that room. Billy was always willing to offer a helping hand to anyone in need. He had a generous heart to go with his big stature. When he gave you a hug or a handshake you knew it was genuine. He is to be cremated and his ashes spread into the Gulf of Mexico. There will be a memorial at a later date to be announced.
Editor’s Note: Lois Gayle Walker is Zana Price’s daddy’s younger sister. Billy Walker walked the aisle with Zana when she married in 1970.