Only families will be allowed to watch the tourney live 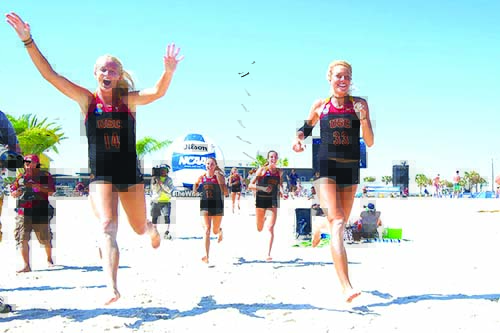 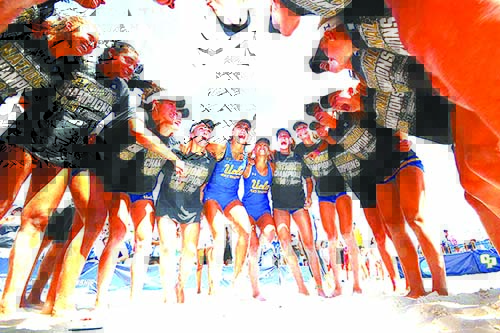 Only families will be allowed to watch the tourney live
FSU & LSU are south’s best hopes to wrestle title from California powers UCLA & USC
By Fran Thompson
The 5th Annual National Collegiate Beach Volleyball Championship at Gulf Shores Public Beach May 7-9 will not include fans.
The tourney, hosted by the City of Gulf Shores, UAB and Orange Beach Sports Commission, will be closed to the public. But the NCAA will allow around 700 spectators per day for the three-day championship so family and friends of student-athletes and coaches can attend. Each of the eight schools will receive an allotment of tickets. But there will definitely be no general ticket sales.
Two time defending champion UCLA enters the tourney as the top seed. USC, the team that won the first two titles, is just behind the Bruins.
The sport’s two southern powers, Florida State and LSU, are seeded third and fourth, respectively. TCU, seeded eighth, is the third mandated eastern college in the tourney. California schools Loyola Marymount, Stanford and Cal Poly round out the draw.
All matches will be either televised live or streamed by ESPN networks. The championship match will air on ESPN2 Sunday at 12:30 p.m. Live streaming of every match on every court throughout the tournament will be available on ESPN3.
Gulf Shores will also host the tourney in 2023 and 2024, before the event moves to Huntingdon Beach for 2025 and 2026.
Gulf Shores Public  Beach has been the tourney site for nine years, including four AVCA Championships before the sport earned its NCAA sanction. The city will try to negotiate a contract to permanently host the event beginning in 2027, giving it a signature spring family alongside the sam weekend’s national qualifying junior tourney that will draw 480 teams to Gulf Shores Public Beach this weekend.
Pictured: (Right) USC’s Sara Hughes and Zo Nightingale head for the Gulf following the Trojans’ 2016 championship; UCLA players celebrate winning the national championship in 2019.