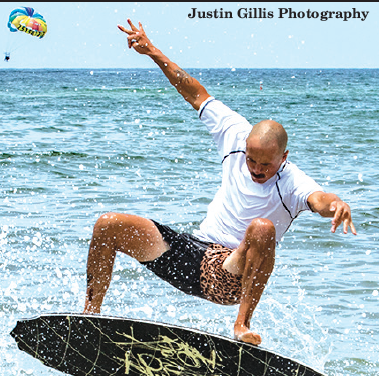 Red Flag Skim Jam a reunion as well as a competition
By Fran Thompson
It was as much a homecoming celebration or even a family reunion as it was a skimboard competition. And it included competitors under eight as well as professionals like Colten Wallace of Elberta and his good friend Kale Troha of Gulf Shores, the $500 grand prize winner.
And it was a long time coming.
The Red Flag Skim Jam competition on June 11 at Gulf Shores Public Beach was the first skimboard competition John McElroy has organized since he closed down his iconic Blonde John’s Surf Shop on Hwy 59 on June 3, 2017.
“It was very nostalgic, and it brought everybody together again. I got to pick up a microphone and do my thing,’’ McElroy said. “I got to be Blonde John again for one day, and I am thankful for that.
“I’m not sure I even recognized that stepping back left a hole in my heart,’’ he added. “But when my friend (Michael Sumlin) opened up Red Flag, we decided to do it again for our community.’’
Sumlin of Red Flag Surf & Dive and TJ Allen of Hog Wild BBQ, who is also a professional wakeboarder, were more than happy to lend their time and their money to an event that drew competitors from Panama City, Pensacola Beach, Navarre and Fort Walton.
“That’s kind of what we wanted – to get everybody back together again,’’ Sumlin said. “It’s competitive. But everybody gets along and has a good time when we get together.’’
“The three of us came together and made it happen,’’ McElroy said. “Those guys have the same desire as I have – To give back to this great community.’’
McElroy said the men may host another competition in the fall and an Autism Speaks surf and skimboard camp later in the summer. He will also take a team to a major competition in St. Augustine for the first time in many years later this summer.
“There is no doubt we are going to do something again next June, maybe even make it two days,’’ he said.
McElroy has not organized a surf or wakeboard competition since Blonde John’s ended its 18 year tenure as the Gulf Shores’ mecca for the surfing, skateboard and skimboard communities.
He said during that span, he organized at least four competitions every year while increasing his retail space from 500 sq. ft. to 10,000 sq. ft.
He has taken surf and skimboard teams to ESA competitions on the Atlantic Coast and his teams have won events in California and Delaware.
“I had a 15 passenger van and we took the kids everywhere. (Current pros) Mason Broussard and Colton Wallace grew up in my store. We could not have done it without our community support, but I am very proud that I was able to provide a vehicle for those two and others to have success. I would like to do the same thing with baseball now.’’
A former baseball player at Weber College in Florida, McElroy and his wife Lori now own Soul Bowlz, which includes brick & mortar outlets in Gulf Shores, Foley, Fairhope and Mobile and a popular food truck. Lori’s dedication to the company leaves McElroy time to coach his 13 year old son’s baseball teams.
He is still referred to as Blonde John when he is out and he still uses that moniker on his popular facebook page.
With the help of Councilman Steve Jones and Carol Samples, he was able to convince Gulf Shores to build South Baldwin’s first skate park.
Although he grew up in Florida, McElroy said he has family with Baldwin County roots that go back to the 1940’s.
“There are so many kids whose lives I’ve been able to touch through the skimboard team,’’ he said. “It’s such a great vehicle for the kids. They can start on the shore where their moms can keep an eye on them and then they graduate into surfing.
“And the competitions are great,’’ he added. “It teaches kids to be competitive, and I believe competition brings success and teaches you that when you fall down, you have to pick yourself up.’’
McElroy said he did not list the competition’s winners on his social media.
“It was a competition. But it was more about creating an atmosphere for us to get out there and have fun. The sportsmanship was undeniable,’’ he said. “And that starts at the top. Our attitude was to have fun. And what you put out there is reciprocated. There is a definite positivity in the skimboard community. I like that they all cheer for each other. It’s a very selfless sport.’’
Sumlin started surfing with local artist Steve Burrow when he was 10. The Gulf Shores native and Foley High grad opened Red Flag Surf & Dive this past January.
“I was competing in ESA surf contests around when Johnny was putting on his contests,’’ he said. “I did a little bit of everything, but I surfed most of the time.’’
He agreed that the Red Flag Skim Jam had a reunion vibe.
“This is definitely something we plan to do again,’’ he said