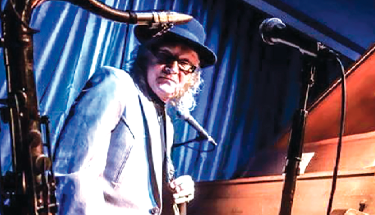 With 50 years of touring behind him, John Lee Sanders is going to have stories from the road, including this early one: “My first visit to Austin was opening For Rod Argent, in the mid-70’s at Armadillo World Headquarters. Our roadies’ equipment truck broke down on the way down from Dallas. The band was in another car. So we never got to play the gig, and no money for a hotel. Our drummer knew the Thunderbirds, who had just moved down from Dallas. They had a band house where we crashed. We ended up partying with Stevie Ray, and Jimmie Vaughan the whole night.’’

We’re not sure what this story has to do with John Lee’s decision to devote himself to playing music, but Sanders did say his earliest music memory is listening to the first single from Elvis, “That’s Alright Mama” on the A side, and “Blue Moon of Kentucky” on the flip-side. Sanders and Elvis met briefly when Elvis owned a house near Sanders’ aunt in Memphis. Sanders was standing among a yardful of screeming teenage girls when Elvis and his female entourage left the house and climbed into a convertible. When things simmered down, Sanders asked Elvis’ father, Vernon, if he could use the bathroom in the house and was able to see the throne of the king for himself.
A Gong Show Winner

While recording in Hollywood, Sanders auditioned for the Gong Show and won. Dressed as the Louisiana Chicken Man, he hand played the first part of Sweet Georgia Brown before finishing the song on his saxaphone. He earned $516.32 for his troubles. “I ended up making a few grand in residuals because I was in the musicians’ union,’’ he said.