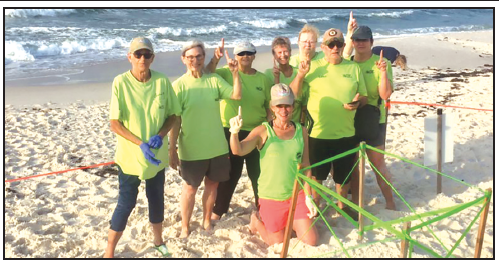 The Share The Beach program documented six nests and 11 false crawls in May, and Sara Johnson, coordinator for the Alabama Coastal Foundation program, said she is excited to see activity picking up even more, with seven more nests documented between June 1-9 between Orange Beach and Dauphin Island.
“Most of our false crawls have been around condos, which could indicate excessive lighting or people that are keeping turtles from wanting to nest when they come up,’’ Johnson said. “Remember, as exciting as it is, if you see a sea turtle come up onto the beach you should give it plenty of space, turn off all lights (including your phone and cameras), stay low and quiet, and call us on the hotline (866-732-8878) to report it.’’
The Coastal Foundation’s mantra during nesting and hatching season is Clean-Dark-Flat: Remove all trash and beach items every day, don’t leave anything out after dark; Avoid white lights on the beach, including flashlights, exterior building lights, and even beach-facing interior lights; And fill in all holes and knock down sand castles every night, leaving our beaches safe for not just sea turtles, but anyone else enjoying an evening stroll.
Share the Beach monitors all 47 miles of the AL Gulf Coast daily looking for sea turtle nests, and works to mitigate human impacts to nesting sea turtles. The ACF is selling sea turtle friendly Maglite red LED flashlights and is also in the midst of a license plate campaign. ACF also has adopting a nest and an annual membership to support its many conservation and environmental programs. Info: joinacf.org.
Escambia County Sea Turtle Patrol recorded Perdido Key’s first sea turtle nest on June 5. After an early start on Pensacola Beach, this nest is the first on the county portion of Perdido Key. Since May and June are the busiest nesting months in Escambia County, more nests are expected in the coming weeks. The first Pensacola Beach nest was located on the east side of Portofino Resort on May 11, earlier than any season since 2013.
Pictured: The Orange Beach Share The Beach crew after discovering this season’s first local nest. (L to R): Janet Dooley, Carol Clark, Jerrie Millican Sherri Descalzo, Mary Davis, Lance Millican, Michele Finn; Front: Wendy Freiberger.