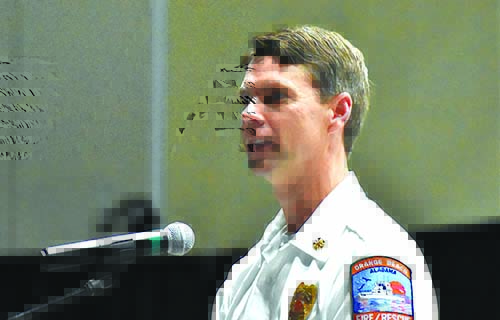 From a Mardi Gras ride on a fire truck sparking an interest in firefighting to being named fire chief in Orange Beach, it’s been a homegrown journey for Justin Pearce.
After a year of serving as interim Orange Beach fire chief, Pearce was officially appointed to the post by the City Council on Tuesday, Feb. 20.
A career firefighter in Orange Beach, Chief Pearce started as a cadet for the department in 1995 after a chance ride in the city’s Mardi Gras parade.
“There was a volunteer, Donnie Morgan, and he invited my dad and I to ride on the old ladder truck in the Mardi Gras parade,” Chief Pearce recalled. “That’s kind of what started it all. I said, ‘There’s something special about this. I want to do this.’”
So at age 15, he got onboard as a cadet in the department and then became full time in 1997. From there he went into fire prevention then was promoted to lieutenant, followed by captain and battalion chief. After the resignation of Chief Shane Phillips in January 2017, Pearce agreed to serve as interim chief.
“We are pleased to officially appoint Chief Justin Pearce as Fire Chief,” City Administrator Ken Grimes said. “Chief Pearce has served the City of Orange Beach for over 20 years in various roles and has led the Fire Department well over the past year as Chief. His commitment to the citizens and guests of our area and to overall public safety for everyone is strong.”
Chief Pearce said it’s been amazing see the department as well as the city grow over the last two decades. As a cadet, he said the department only had two firefighters, a chief and one fire station.
Today, there are four fire stations, the fire administration building and roughly 70 personnel, including full-time and part-time firefighters, administration staff, and resident firefighters that are part of the department-run rookie school. The department handled 2,860 calls in 2017.
“It’s a huge honor to be able to go from a cadet all the way up to the chief and be a part of the growth of the department as well as seeing how we have grown technically,” Chief Pearce said. “One of those two people in the early days was a paramedic and now we have at least five paramedics on duty every day. We also have four of those who can fly on helicopters because they are critical-care paramedics, the highest trained paramedics you can have in the state of Alabama. We’ve just come such a long way and it’s awesome to be a part of that.”
Chief Pearce doesn’t plan on slowing things down either.
“I want to continue to focus our efforts on training our personnel for the safety of the community and also each other,” he said. “So one of the high-priority areas is keeping up with trends and technologies so we’re staying ahead of the curve.
“I want us to be a progressive department and to be on the leading edge of new technologies and new methods.”