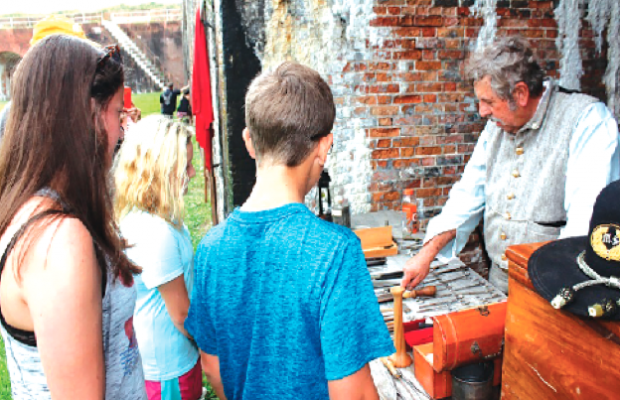 A commemoration of the Battle of Mobile Bay and siege of Fort Morgan is scheduled from 9 a.m. ‘til 3 p.m. on Saturday, Aug. 3 at Fort Morgan Historic Site, located at 110 Hwy. 180 in Gulf Shores.
This one day living history event will remember the sacrifices of the United States Armed Forces and Confederate States Armed Forces during this pivotal naval battle and siege. Uniformed interpreters will bring the fort to life through demonstration of period drills on the fort’s parade ground as well as artillery demonstration at the water battery. Special talks given by the site historians will provide insight into the events that transpired as well as introduce topics little written about in books.
For more info, call 251-540-5257 or visit fort-morgan.org. Admission: Adults $7; Students & Seniors (65+) $5; Children (ages 6-12) $4.
The Battle of Mobile Bay is one of the iconic confrontations of the American Civil War at sea. During the three-day event, the fort’s museum will feature rarely exhibited artifacts from three of the fleet of ships engaged during the battle; the USS Tecumseh, USS Philippi, and the CSS Gaines.
The USS Tecumseh, an ironclad ship widely thought to be unsinkable, sank during the Battle of Mobile Bay when she struck a mine called torpedoes during the war. The ship capsized and rests upside down northwest of Fort Morgan.
Union Admiral David Farragut, lashed to the rigging of his ship, saw his fleet pulling back after Tecumseh went under. That’s when Farragut yelled out his now famous order, paraphrased as, “Damn the torpedoes, full speed ahead.”
The USS Philippi was set afire by Confederate artillery and destroyed while following Admiral David Farragut’s fleet into Mobile Bay. The CSS Gaines was heavily damaged during the Battle of Mobile Bay and as she took on water became grounded within 500 yards of Fort Morgan. Overlooking Mobile Bay, Fort Morgan went on to con