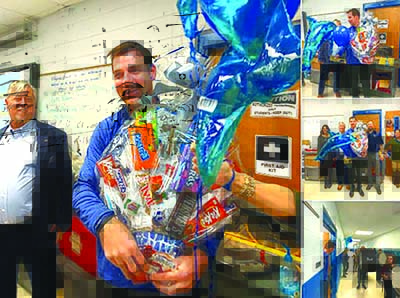 Creel, Prince & Hill named Teachers of the Year at G.S. Schools
Courtney Creel, Scott Prince and Jason Hill were named Gulf Shores Schools firt ever Teachers of the Year, as the 2019-20 school year was the city’s first as an independent school district.
GSES Teacher of the Year – Courtney Creel
This is Courtney Creel’s 5th year teaching fourth grade at Gulf Shores Elementary School. Before moving to the Gulf Coast, she lived and grew up in a small town about 15 miles north of Montgomery, called Prattville. She attended Prattville High School, and Auburn University of Montgomery, where she received her teaching degree. Previously, she taught 2nd grade and 9th grade math.
GSMS Teacher of the Year – Scott Prince
Scott Prince (pictured) teaches general and advanced 8th grade Life Science and Greenpower Tech at Gulf Shores Middle School. He coaches the Turbo Dolphins Greenpower USA race team at the school. He is originally from Cairo, Georgia – where he attended Cairo High School. He obtained degrees in education with specialization in Science and Social Science from Valdosta State. He is currently in the process of earning his National Board Certification. Some of his previous accomplishments are Grady County Public Schools Teacher of the Year and Washington Middle School Teacher of the Year, where he started and built a STEM program/curriculum.
GSHS Teacher of TheYear – Jason Hill
Jason Hill teaches AP Chemistry, Honors Chemistry and Physical Science. It is his fourth year teaching and coaching at Gulf Shores High School and his 21st year as an educator. Jason also serves as an assistant football coach, head indoor and outdoor track and field coach and is the school’s athletic academic advisor. Jason has an Associate Degree from Southern Union State Junior College, a Bachelor’s from UAB and a Master’s from the University of Montevallo. Jason’s wife, Tanya, also serves the school system as the Child Nutrition Coordinator and his daughters, Bayleigh and Cyarah, are both students in Gulf Shores.