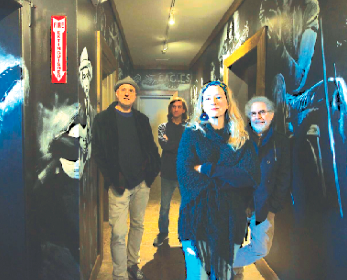 Earth Day Mobile Bay returns for its 30th year with an all-day event at the Fairhope Pier Park on Saturday, April 20. Exhibits will be open from 10 a.m. to 6 p.m. and Live music is scheduled from10 a.m. to 7 p.m.
Alabama’s largest Earth Day celebration, Earth Day Mobile Bay is again expected to attract over 6,000 participants there for the free event celebrating the environment and the earth.
The outstanding list of entertainers at the event will include Molly Thomas & the Rare Birds, Blue Bicycle, A Little Change, Sassafrass, Mayor Wilson & Brent Holmes & the P-Nut Pirates.
Other activities include animal exhibits, recycling info, a documentry film tent, local vendors of green and earth-friendly solutions and local and naturally healthy food sources.
For more info, email info@earthdaymobilebay.org or call 251-990-8662 or visit EarthDayMobileBay.org or Facebook.
Pictured: Molly Thomas & The Rare Birds will be playing songs from their new album, Honey’s Fury,’’ during Earth Day. The foursome, shaped by their Gulf Coast heritage, seamlessly weave 12 songs of love, betrayal, destruction, forgiveness, reflection, forgiveness and healing.
A multi-instramentalist, Molly has played alongside Todd Snider, Guster and Will Hoge and Grayson Capps. She describes her own sound as Indie Swamp Pop. Her new album, follows three well received solo albums, Honey’s Fury is her first with producer and guitar virtuoso Rich Hirsch, who has played with and had his songs recorded by Cher, Tina Turner and Bonnie Raitt among many others. The Songbird line-up also includes drummer John Milham, a Fairhope High grad, that Molly played with in Slow Moses. Bassist John Keuler holds down the band’s bottom end with Milham. The album was mixed by Grammy Award winning engineer Trina Schumacher, another Fairhope resident with a resume that inclues collaborations with EmmuLou HJarris, Sheryl Crow, The Indigo Girls and The Dixie Chicks.

Earth Day Pensacola will be held in Seville Square this year

Earth Day Pensacola will draw thousands to the city to celebrate green technology, and promote green lifestyles. The celebration will be held in Seville Squ8are in downtown Pensacola on April 20 from 10 a.m. ‘til 4 p.m. rain or shine.
The theme is Energy, Transportation, and Sustainability. We will have vendors that will support the theme including share riding, public transportation, hybrid vehicles, wind energy, solar energy, and more. We will have gardening, plants, and water education vendors as well. There will be a designated kids activity area too. Food, music, and yoga are also part of the line up.
For more info, visit earthdaypensacola.org, email ericst. pierre03@gmail.com or call 850-293-3578.